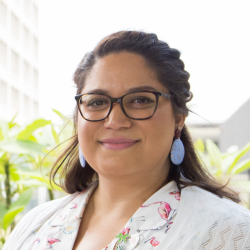 Dr. Nural Cokcetin is a postdoctoral researcher specializing in microbiology at the ithree institute, University of Technology Sydney. Her current research focuses on understanding the antibacterial and prebiotic properties of honey, with a drive to use this knowledge to develop new treatments for infections caused by multidrug resistant superbugs and to use honey as a prebiotic to improve human gut health.

Nural is equally passionate about doing research that has direct positive impacts on society, as she is about communicating her research to as broad an audience as possible. In recognition of this, Nural was named the best young science communicator in Australia and the international runner-up in the FameLab Science Communication Competition and was invited to give a TEDx talk in Sydney.

Outside of the lab, you can often find Nural reading a good book, trying her hand at a new craft or DIY project, or off on a long road trip. She also loves entertaining (read annoying) everyone around her with her brilliant (read terrible) pun work! You can also follow her on Twitter.

Q. Hello Dr. Cokcetin! Tell us a bit about your research background and how you ended up doing a Ph.D. that focused on the properties of honey.

One of my majors in my undergraduate (Bachelor’s) degree was microbiology, and I became fascinated by how bacteria and other microbes could cause nasty infections and disease, and how much they influenced our daily lives — they are literally everywhere!

I loved the idea of doing research — of discovering something new and using that to help society, and I attended a research day showcasing all the amazing research that was happening at the University of Sydney. There, I heard a presentation on the medicinal properties of honey by Dr. Shona Blair, who was the first scientist to look at the therapeutic properties of honey in Australia and who later became my research supervisor! She specifically discussed how it could be used to kill bacteria and other microbes that cause infections, particularly in wounds.

We had always used honey as a medicine at home, for example, as a tonic for a sore throat or an upset stomach. I had also heard of it being used as a wound dressing during times of war, but I thought it was just something that your grandparents tell you about! I was amazed at how much science there was behind its medicinal properties.

I completed an Honours research project (a year-long research project + thesis, similar to a Masters) where I looked at the antibacterial effects of honey on problematic pathogens, which are bacteria that cause nasty infections. It was during this project that I found out honey was a fantastic antibacterial agent and could stop infection-causing bacteria from growing (and therefore causing infections and disease). And it worked really well on superbugs too, which are bacteria that have learned to fight off the effects of antibiotic drugs. This really cemented my research interest in the medicinal properties of uses of honey, especially at a time where antibiotic resistance was becoming a global health concern and there was an urgent need for alternatives to treat infections caused by these antibiotic-resistant superbugs.

Q. I think many people would be surprised to hear that there are different varieties of honey. Could you elaborate on some of the different types and what makes them unique or interesting?

Many people do think of honey as a generic product — just a sugar syrup or solution. In fact, honey is incredibly complex and has over 200 components! And different honeys can not only look and taste very different, but they can also have different medicinal properties too.

You can also find mixed floral varieties that can be labeled as many different things: mixed honey, mountain honey, bush honey, rainforest honey, garden honey, etc. These suggest that the honey is made from numerous floral sources found in the specified area or region.

Q. You’ve conducted research on how honey can affect the microbiome. What were some of the findings that intrigued you?

While I am very interested in understanding the antibacterial properties of honey, the reality is that most honey around the world is sold as a food and not as an antibacterial wound dressing. So I was very interested in finding out whether eating honey has an effect on the many, many (trillions!!) bacteria that live in our gut (our microbiome) which have a huge influence on our overall health and well-being.

During my Ph.D. at the University of New South Wales, I studied a variety of Australian honeys and their effect on our gut microbiome in an ‘artificial gut’ model in the laboratory. Our gut bacteria are made up of a balance of beneficial and potentially harmful types, and when this balance is disrupted, we see a range of conditions arise including bowel diseases (e.g. irritable bowel syndrome, inflammatory bowel disease, and colon cancer — a leading cancer killer around the world), allergies, asthma, obesity, heart disease, and even mental health issues. Because of this, we are very focused on creating and maintaining a healthy gut and one way in which we can do this is through our diet, for example, by eating prebiotic foods that are known to ‘feed’ our beneficial gut microbes.

I found that the honeys I tested had prebiotic activity and a positive effect on our gut microbes. They boosting the numbers of the beneficial bacteria, decreasing the numbers of the potentially harmful ones, and also by helping our gut microbes produce beneficial compounds such as butyrate, which we know has a protective role against the development of many bowel diseases including colon cancer.

The next step was to test whether these results could be taken out of the lab and translated to a real-life situation. So, we had about 50 people eating one tablespoon (20 g) of honey per day while we monitored the changes in their gut microbiome. And amazingly, we did see significant benefits.

Q. How is research on honey connected to developing new treatments against drug-resistant superbugs?

Like I mentioned above, honey is an extremely effective antibacterial agent against many types of bacteria, including drug-resistant superbugs. The most exciting bit of this research is that, despite honey being used medicinally for thousands and thousands of years, bacteria have never learned to become resistant to honey (the way they can learn to become resistant to antibiotics). So, if we can better understand how honey can kill these bacteria without them becoming resistant to it we can design new drugs that work in the same way as honey does, and help to reduce some of the burdens of antibiotic-resistant superbugs around the world.

Q. What is the most surprising/interesting/curious fact you have discovered about honey over the course of your research career?

Probably the most surprising thing I have learned about honey is how effective it is as a wound treatment. There are so many examples of honey working when other treatments have all failed. The most extreme example that I’ve seen and often talk about is one of an 80-yearold woman who had non-healing, infected, chronic ulcers on both her legs for over 20 years and she could no longer walk. All of the treatments she was prescribed had failed over that whole period (antibiotics to clear the infection and compression bandages to help with wound healing). The doctors were at the point of amputation. One of her nurses suggested that they use honey bandages as a last resort, and incredibly, within 5 weeks, the infection was under control and the wounds had significantly healed. By the 10th week, the infections had cleared, the wounds healed, and the patient could walk again. In this lady’s’ case, the honey had literally saved her limbs.

It’s both incredible to hear how well the honey worked and equally devastating that it was used so late and only as a last resort. It could have saved this patient years of pain and suffering.

And on a lighter note — it’s always amusing when people find out that honey is bee vomit for the first time! I was shocked when I first found out!