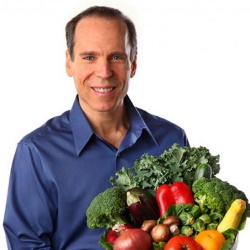 Joel Fuhrman, MD is a board-certified family physician and nutritional researcher who specializes in preventing and reversing disease through nutritional and natural methods. He is the president of the Nutritional Research Foundation and author of seven New York Times best sellers: Eat For Life, Eat to Live, The End of Diabetes, The End of Dieting, The End of Heart Disease, Super Immunity, and The Eat to Live Cookbook. As one of the country’s leading experts in nutritional and natural healing, he has appeared on hundreds of radio and television shows, including The Dr. Oz Show, Live with Kelly, FOX, CNN, Today, Good Morning America, the Discovery Channel, and Food Network. His own PBS television programs directly address the crisis of obesity and chronic disease plaguing America and has raised over 70 million to help support PBS stations nationwide. Dr. Fuhrman also operates the Eat To Live Retreat in San Diego, where people come from all over the world to recover their health.

Q. Your latest book that came out this year is Eat For Life. This isn't your first book on the Nutritarian diet, though. What prompted you to follow up Eat To Live with Eat For Life?

It has been 15 years since Eat To Live first came out, and the scientific support for a Nutritarian diet has become overwhelming and indisputable. The thousands who have adopted this way of eating and living have demonstrated not only dramatic weight reduction that has been permanent, but also remarkable transformations and recoveries from serious illnesses, including MS, diabetes, heart disease, ulcerative colitis, rheumatoid arthritis, lupus, psoriasis, autoimmune hepatitis, and even asthma. The time was right for my last and most comprehensive book (out of 13) to give a complete overview of this program and the science that supports it, to make it my primary work for interested parties and health professionals who want to understand the thousands of scientific references underpinning this pinnacle of nutritional excellence to maximize longevity and enable disease-reversal.

Q. The Nutritarian approach suggests that a healthy diet involves a moderate caloric deficit while taking in nutrient-dense calories that come almost entirely from plants. This may be a significant dietary shift for people coming from a standard American diet. What are the biggest concerns you have seen from people trying to move from a standard American diet to a Nutritarian diet, and how would you address their concerns?

The overwhelming difficulty people have is beating their addictive relationship with sweets, processed foods, and fast foods and the emotional underpinnings that perpetuate a dysfunctional relationship with food. However, with the right information, and sometimes some added personalized attention, we nurture these people back to not only good health but to a normal relationship with real food, prepared in a multitude of delicious ways.

Q. While discussing the first principle of Nutritarian eating in Eat For Life, you mention that higher nutrient density can naturally lead to a lower desire to overeat. Can you review the evidence suggesting that micro- and phytonutrients play a role in satiety and the relative evidence base compared to other dietary factors like lower energy density foods[1] or protein[2]?

Many elements play a role in resolving this complicated issue. However, the first and foremost critical element driving overeating and more frequent eating is the toxic load of the body, which creates fatigue and other uncomfortable symptoms, when the digestive process ends. Standard American Diet (SAD) eaters, because they are so phytonutrient-deprived and poisoned with reactive oxygen species and advanced glycation end products and nitrogenous waste from excess (animal) protein simply feel ill, unless they continually overeat. Eating less and eating right is just too uncomfortable due to the detoxification that is accelerated in the non-digestive (resting) stage of the digestive cycle. Of course, highly concentrated calories that enter the bloodstream rapidly, (such as sugar, honey, and maple syrup) also stimulate dopamine centers in the brain inducing chronic dependency and heightens the desire for more stimulation.

Q. Speaking of protein—while discussing the second principle of the Nutritarian diet (that a diet should be hormonally favorable to maximize lifespan), you mention that older adults may need higher levels of protein to thrive. However, there's also some evidence that the RDA for protein for the general population (0.8 grams per kilogram of bodyweight) may be too low[3][4]. How much protein per kilogram of bodyweight do average younger or middle-aged people on the Nutritarian diet take in, and do they have trouble getting enough?

A Nutritarian diet is more than protein adequate for 99 percent of the population. And the protein can be easily modulated by adding more hemp seeds, edamame, and other high-protein plants, before considering more high-protein animal products, which have been shown repeatedly to result in premature death in large, long term epidemiological studies. A Nutritarian diet generally contains between 35 and 45 grams of protein per 1000 calories supplying over 1 gram of protein per kilogram body weight. Many nutritional studies on this issue are fraught with errors as they study “sick” American eating a standard (SAD) diet, with poor digestive and assimilation and universal deficiencies in antioxidants and other micronutrients. Unquestionably most people are protein poisoned, demonstrated with elevated levels of ammonia, urea, uric acid, and high IGF1 levels which beget higher rates of cancer and premature death. The most credible long term studies, such as the Adventist Health Study 2, clearly show more dietary plant protein leads to more years of life, whereas more dietary animal protein leads to a shorter lifespan. So contrary to common thought, protein adequacy is easy to achieve with protein-adequate plants, such as greens, beans, seeds, nuts, and whole grains.

Q. When you cover the third principle of the Nutritarian diet in Eat for Life, you review a wealth of evidence suggesting that the standard American diet is woefully low in essential vitamins and minerals as well as phytonutrients. However, you also point out that vegan or almost-vegan diets may require supplementing certain nutrients that are more prevalent in animal products. These include EPA and DHA, zinc, vitamin B12, iodine, and vitamin D. When you work with people on a vegan or near-vegan Nutritarian diet, do you recommend supplementation for these across the board, or do you take it on a case-by-case basis? And what doses tend to be needed?

I generally recommend a basic supplemental regiment that includes about 10 mg zinc, 100mcg B12, 200-300 mg EPA + DHA, 150 mcg iodine and a few other nutrients mentioned above, with occasional blood work every few years just to make sure the levels needed and absorbed are in the ideal range. It is potentially possible that both too much of certain nutrients and too little can both be unfavorable—and indeed this may be the case with elements such as DHA and even vitamin D. So blood work every once in a while assures we hit the sweet spot. By the way, DHA deficiencies as measured by an omega-3 index blood test are linked in studies to cognitive impairment later in life and brain shrinkage, and have been shown to be common in the general population as well. Remember, one of the dangers of routine supplementation is many conventional supplements contain folic acid, and there is sufficient evidence for concern about its cancer-promotion properties. Avoiding certain supplemental ingredients is just as important as getting enough of others.

Q. Your fourth and final principle of Nutritarian eating involves disease-causing substances like environmental toxins and synthetic chemicals. One method you suggest for this is to eat organic foods when possible. However, even organic foods can have environmental toxins if they're close to sources of pollution[5]. How serious of a problem do you think this is, and what additional tips do you have for Nutritarians trying to avoid environmental pollutants in their foods?

That is correct, that sometimes organic is not even sufficient, for example, even organic brown rice has been documented to be contaminated with arsenic and avoiding or restricting even wild seafood is also necessary to keep microplastics and other ocean pollution out of our bodies.

Q. Is there anything else you would like our audience to know about your work and the Nutritarian approach to healthy eating?

I would like to reinforce my passion for healing people with chronic illnesses via nutritional excellence and let everyone know they do not have to be sick and take toxic cancer-promoting drugs. For example, high blood pressure, type 2 diabetes, heart disease (chest pain), and even autoimmune illnesses consistently and most remarkably reverse and disappear on this program. I have a live-in center in San Diego where people with serious conditions can come under my care to lose weight, resolve food addiction, and gain their health back.