Study under review: Effect of exercise training interventions on energy intake and appetite control in adults with overweight or obesity: A systematic review and meta-analysis

What effect does exercise training have on calorie intake and appetite in adults with overweight or obesity?

Exercise may also result in increased energy intake. When a person is burning more calories at rest (i.e. because they have more muscle tissue, which is more metabolically active than fat tissue), they tend to eat more calories[8]. An increase in calories burned from exercise may be compensated for by an increase in calorie intake[9], which might be one contributor to the lackluster results of many exercise-weight loss studies[10]. According to this logic, people trying to lose weight are faced with a catch-22: exercise more and run the risk of being so hungry that restricting energy intake becomes all but impossible, or exercise less (to limit potential hunger cravings) and risk not achieving the calorie deficit necessary for weight loss. Considering that exercise may also result in decreased hunger when adjusted for total energy expended[11], whether the idea that exercise increases hunger truly is even accurate is far from a resolved question.

Individual studies looking at the effect of exercise on calorie intake and hunger have come up with differing results, but a previous systematic review including participants at a healthy weight showed that exercise had no effect on calorie intake[11]. However, no systematic review has looked at the effect of exercise on appetite and energy intake among people with overweight or obesity trying to lose weight. This systematic review, undertaken by the European Association for the Study of Obesity Physical Activity Working Group, aims to fill that gap.

This preregistered systematic review examined 48 studies that prescribed physical activity for weight loss to participants with overweight and obesity. Studies were excluded if their primary aim was to prevent weight gain or obesity, if they controlled the calorie content of the diets participants were on, or if they were short-term trials investigating the acute effects of exercise on appetite. Quality of trials was assessed based on the National Heart, Lung, and Blood Institute’s criteria for rating the quality of the strength of evidence[12].

Studies were included if participants had common comorbidities of obesity, including type 2 diabetes, hypertension, dyslipidemia, metabolic syndrome, non-alcoholic fatty liver disease, or osteoarthritis. Studies were excluded if they had participants with cardiovascular disease, cancer, rheumatoid arthritis, kidney failure, and other conditions. Other study characteristics are laid out in Figure 1. 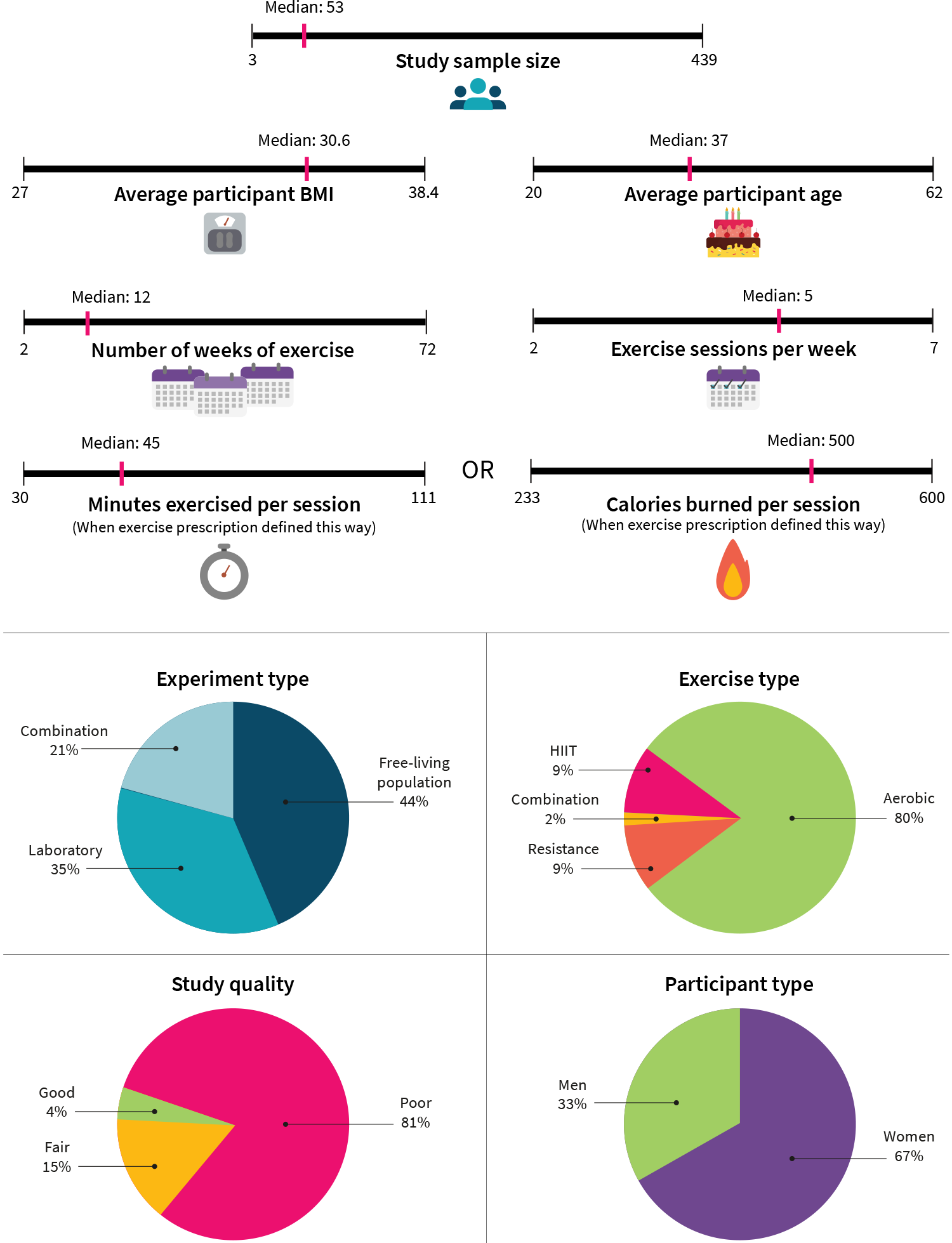 There were two primary outcomes for this study: the before-vs-after change in calorie intake and appetite, and the difference in calorie intake and appetite among participants in exercise interventions, compared to controls. Calorie intake was measured with self-reported dietary assessments, objective assessment (i.e. photographed meals), or calculated from the doubly labeled water method of determining metabolic rate. Appetite was measured via assessments that scored fasting hunger and fullness, post-prandial (“after eating”) hunger and fullness, restraint, disinhibition/uncontrolled eating, susceptibility to hunger, and food reward. The authors looked at the different effects of training modalities (i.e. aerobic, resistance, high-intensity interval, and combination training) as secondary outcomes. The authors also explored the differences based on biological sex, exercise dose/intensity, and energy intake assessment methods.

This systematic review and meta-analysis identified 48 studies that measured food intake and/or appetite in participants with overweight and obesity engaging in an exercise program. The authors looked at before-and-after changes in appetite and intake, the differences in appetite and calorie intake between exercise interventions and controls, and the way variables like different exercise types, exercise dose, sex, and assessment method influenced the results.

In the studies with a non-exercise control group, there was no difference in calorie intake between exercise and control arms. When only studies of fair and good quality were analyzed, including four randomized controlled trials and two open-label (before-and-after) trials, people exercising consumed 102 more daily calories than the controls—a small effect size. The authors did not calculate the number of calories expended due to exercise, although the prescribed number of calories per exercise session was available for some studies and is mentioned in Figure 1.

In studies reporting the before-and-after change in calorie intake (which is inherently more prone to bias than comparing an intervention to a control), exercise interventions were associated with a decreased intake of 57 calories. As shown in Figure 2, when excluding poor-quality studies, this result reversed direction (+67 calories) and lost statistical significance. These two are at least partially consistent on account of their overlapping confidence intervals. 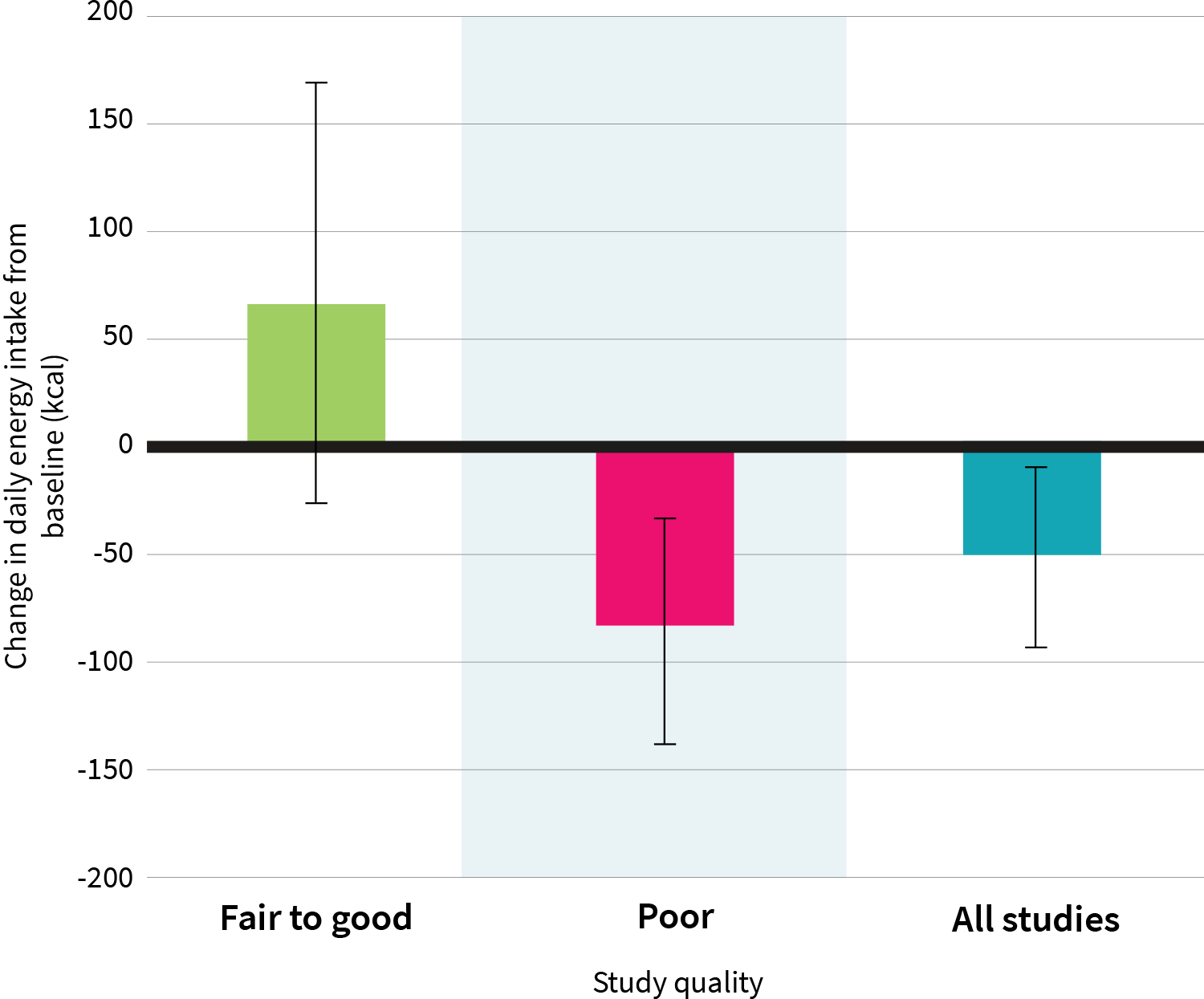 The results did not differ by exercise intensity or sex. When looking at studies based on how they assessed calorie intake, self-reported studies showed a decrease in calorie intake, while the gold standard—indirect calorimetry by the doubly labelled water method, only used in one study[13]—showed an increase. In light of the well-known limitations of self-reported energy intakes[14], this inconsistency is not surprising.

In terms of appetite ratings, fasting morning hunger increased by 8% (8 mm out of a 100 mm visual analog scale), but fasting fullness did not change. Daily hunger and fullness (measured at some point after a meal) were not different between intervention and control. Eating restraint did not change, but this may have been driven by one study, and uncontrolled eating decreased slightly in response to exercise.

Every one of the four studies available reported different results when evaluating food preferences after exercise, with the most rigorous showing no effect.

Only small, variable effects of exercise on appetite and calorie intake were observed. The most reliable result, in studies with a fair or good quality rating that included a control arm, suggests that exercise was associated with the consumption of 102 more calories per day than controls.

This systematic review and meta-analysis appears methodologically sound and the results are in line with those of a previous systematic review of studies in a healthy-weight population[11]. Although detailed theoretical models on the effect of exercise on appetite have been put forth in narrative reviews[15][9][16] that ultimately come to the conclusion that “it depends,” the present systematic review clarifies that interventional studies show a small—if not negligible for some people—increase in calorie intake due to exercise.

Energy balance was not estimated, which would have increased the real-world applicability to the results of the analysis. To the authors’ credit, this study shows the effect of exercise on energy intake, not its effect on energy balance or total energy expenditure. Across all studies, the median exercise intervention expended about 500 calories, so it’s reasonable to infer that the average increase of 102 calories seen in fair and good quality studies actually represents a 400 calorie deficit. Thus, a small increase in intake doesn't imply that exercise will cause weight gain, but it may explain why exercise-induced weight loss isn’t as impactful as that predicted by the increase in energy expenditure.

The 95% confidence intervals of the individual studies (which cover a range of values in which one would expect 19 out of 20 measurements to fall within) were quite spread out. This spread is a result of both the small sizes of the included studies, the significant methodological variations between studies, and the large individual variability in response within each study. As suggested in some weight loss maintenance studies[17], which were deliberately excluded from the meta-analysis at hand, some people experience beneficial effects from exercise for weight management, while others don’t experience as much of a benefit. The variation in individual responses seen in weight loss and weight maintenance studies may be due to simultaneous changes in diet quality and macro-/micro-nutrient composition, genetics and epigenetics, psychological or environmental factors, gut hormone responses, or compensatory behaviors (i.e. less habitual physical activity outside of the structured exercise intervention[6]), among other reasons.

The generally poor quality of the studies included in the meta-analysis is an important issue to consider: only about 20% of the studies were rated as having fair or good methodological quality. Poor compliance to exercise interventions is another contributor to the lower-than-expected effect of exercise-weight loss studies[10]. When poor quality studies were removed from the analysis of both primary outcomes (the pre-post calorie difference and the intervention vs. control calorie difference), the result shifted toward an increase in calorie intake in both cases. This means that the preponderance of poor quality studies could be responsible for the overall lack of effect. A previous systematic review in healthy-weight populations showed a very similar result: though exercise had no significant overall effect on energy intake, five of six studies with statistically significant results showed that exercise led to marginally increased caloric intake[11].

As evidenced by the inconsistency between self-reported intake and objectively measured intake in this study, also undermining this study (and many nutritional studies) is the general reliance on subjective self-reported dietary intake data, which typically underestimates total caloric intake[18][19]. Considering that under-reporting of calorie intake is common among athletes[20], people with obesity, and just in general[18], the accuracy of such small changes in calorie intake suggested in this study may be called into question and the practical relevance of such a small change is negligible.

A parallel scoping review showed a beneficial effect of exercise on weight loss and body composition for people with overweight or obesity[1]. Specifically, any type of exercise was shown to improve fat loss (especially the particularly unhealthy visceral fat), and resistance exercise increased retention of muscle mass. Another meta-analysis comparing the effect of different dietary patterns and different exercise training types showed that exercise reduced LDL cholesterol, triglycerides, insulin, and insulin resistance, and increased HDL cholesterol[3]. In light of those results, the study under review shows that an exercise component of a weight loss intervention is unlikely to have a harmful effect on negative energy balance, and should be considered an important part of an effective weight loss strategy.

This systematic review and meta-analysis did not suffer from any fatal methodological flaw, but still had limitations. The large variation in individual response to exercise confirms existing evidence suggesting that the effects on appetite and, even more so, energy intake, are highly individual. To truly answer the question of whether exercise increases appetite, or specifically, whether exercise-induced energy expenditure results in an accompanying increase in energy intake, energy balance—not just energy intake—would need to be calculated and factored into the meta-analysis. Overall, the study at hand adds to the evidence that exercise has a small effect on appetite and calorie intake.

Exercise probably has a small effect on appetite and calorie intake. The studies that do show an effect (in either direction) are compromised by their relatively low rigor. Moreover, the mostly null or otherwise small results of this study do not differ according to exercise intensity, exercise type, or sex. Future meta-analyses should consider the net effect of exercise on energy balance and total energy expenditure, as well as energy intake. This will help confirm whether the caloric deficit caused by exercise can be added to the more well-established benefits of exercise on body composition and cardiometabolic markers.