Fighting back against food allergies with fish oil

Fish oil may help combat food allergies, as tested in this animal study looking at peanut and whey allergies.

It seems like there’s more information available on fish oil every single week. The various uses and health benefits of n-3 fatty acids (commonly referred to as omega-3 fatty acids) have been extensively researched and reported on in the media, on Examine.com, twice in this issue of Study Deep Dives, and also in previous issues (see Study Deep Dives #2, “Effects of omega-3s on brain function from infancy to old age” and Study Deep Dives #1, “Another benefit of omega-3s: A better treatment for epileptic seizures”).

Omega fatty acids are grouped based on how far away the first double bond is from the terminal, or “omega” carbon. The presence of double bonds causes a fat to be “unsaturated”.

The two most discussed n-3 fatty acids are eicosapentaenoic acid (EPA) and docosahexaenoic acid (DHA), which are found in fatty fish, fish oil, and other marine-based oils. A typical western diet has relatively low amounts[1] of n-3 fatty acids and more n-6 fatty acids, which are found in vegetable oils and animal sources like meat and eggs (although farm animals fed their natural diets[2] tend to have higher n-6 levels). Different oils and meats have widely varying amounts of n-6 fatty acids. For example, corn oil is relatively rich in n-6, whereas olive oil has high levels of monounsaturated fatty acids. In addition to fish oil supplementation, n-3 fatty acids (particularly DHA) are also added to many infant formulas, as they are typically found in high levels in human breast milk[3].

An inverse correlation[4] has been observed between the consumption of n-3 fatty acids and the prevalence of allergic diseases. As dietary intake of n-3 fatty acids has become a smaller proportion[5] relative to increased intake of n-6 fatty acids, the incidence of various types of food allergies and other allergic disorders has increased[6]. Since the reactions to some allergens can be life-threatening, investigating allergic sensitization is an important area of research.

There is a correlation between decreases in the ratio of n-3:n-6 fatty acids in the average diet and increases in the prevalence of food allergies.

The immune system operates by generating molecules called immunoglobulins (abbreviated as Ig) against different antigens. These Igs, or antibodies, have several different classes. Two of the most common types are IgG and IgE, whose roles are summarized in Figure 1. IgG antibodies are responsible for the immune response to bacterial and viral infections, while IgE antibodies fight foreign substances and can react to allergens. When an allergen comes into contact with IgE bound to mast cells, a cell type in the immune system, histamine is released and we experience allergic symptoms. Mast cell changes during the allergic response are also responsible for producing the life threatening symptoms of anaphylaxis. 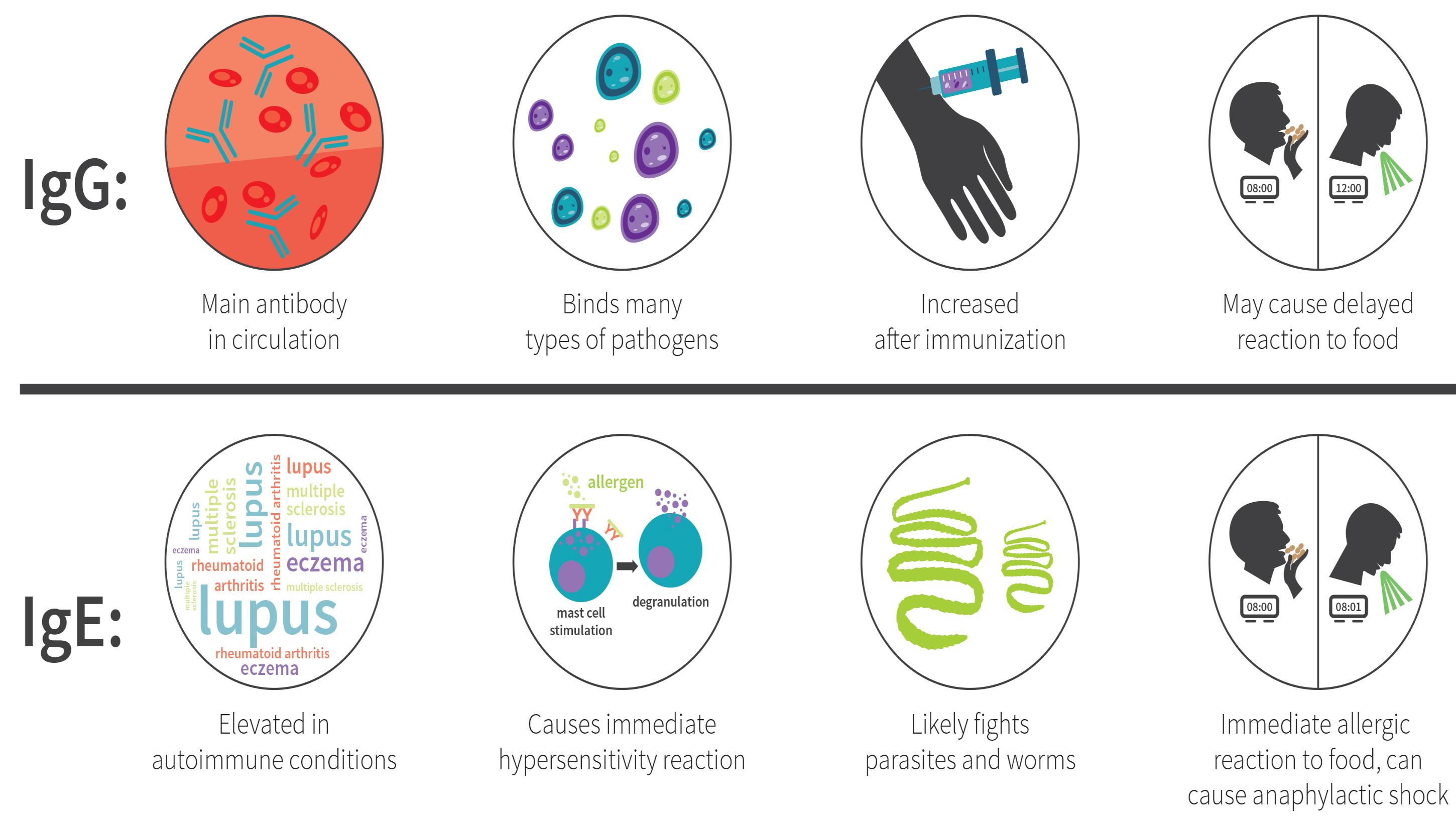 Antibodies are acquired through either an active exposure or a passive exposure. In active immunization or sensitization, the body generates its own antibodies against a foreign body. These antibodies can be beneficial, like the ones generated in response to a vaccine. These antibodies can also be harmful, like the ones generated inappropriately in response to a food or environmental allergen. In contrast, passive immunization or sensitization occurs when antibodies are transferred from one person to another. The most common scenario where this occurs is the IgG antibodies that are transferred from a mother to an infant during birth. This passive transfer is temporary, whereas the active generation of antibodies is more long term.

The authors of this study previously showed[7] that n-3 fatty acids in general were able to reduce the allergic response to whey in mice by roughly 50%. The study under review aimed to build on their previous research to determine the effects of specific fatty acid consumption on prevention of both passive and active allergic sensitization, and reduction of the severity of responses to different dietary allergies.