Does calcium reduce the risk of pre-eclampsia?

Pre-eclampsia[4] is clinically defined as elevated blood pressure (140/90 mmHg over two occasions, or 160/110 on one occasion) in women who aren’t normally hypertensive, occurring after 20 weeks of pregnancy, accompanied by protein in the urine, liver or kidney problems, fluid in the lungs, or low platelet count.

The causes and effects of pre-eclampsia are laid out in Figure 1. Reductions in pre-eclampsia may reduce the overall risk of maternal deaths. 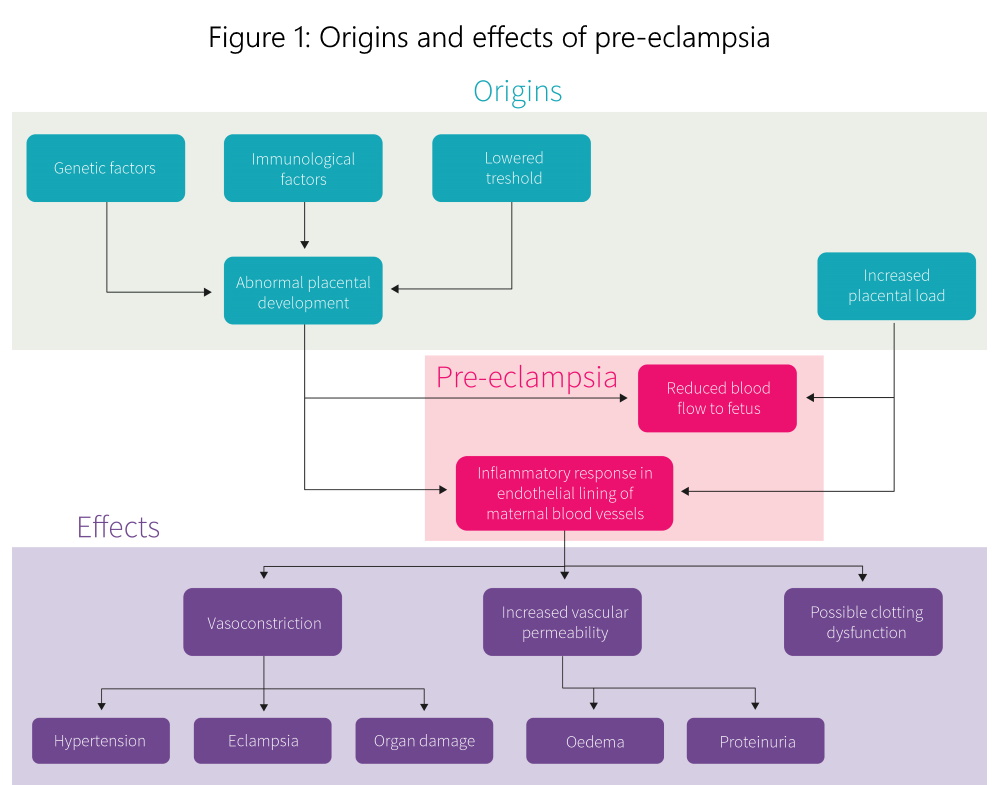 The present study was designed to overcome these problems. It is a larger, longer term parallel arm, double-blind, randomised, placebo-controlled trial testing the effect of calcium supplementation given before and during early pregnancy on pre-eclampsia.

Higher calcium intake has been associated with a reduced risk of pre-eclampsia, which is responsible for almost half of all hypertension-related pregnancy complications. Randomized controlled trials and meta-analysis have shown inconsistent results with calcium supplementation on the risk of pre-eclampsia. The present study was a parallel arm, double-blind, randomised, placebo-controlled trial testing the effect of calcium supplementation given before and during early pregnancy on pre-eclampsia.

The study under review was a preregistered[8] multi-country (South Africa, Zimbabwe, and Argentina), double-blind, randomized, placebo-controlled trial testing the effect of calcium supplementation given before and during early pregnancy on pre-eclampsia.

A total of 1,355 women whose most recent pregnancy was complicated by pre-eclampsia or eclampsia were recruited if they were intending to become pregnant again and did not have a history of kidney stones, kidney diseases, or parathyroid diseases. 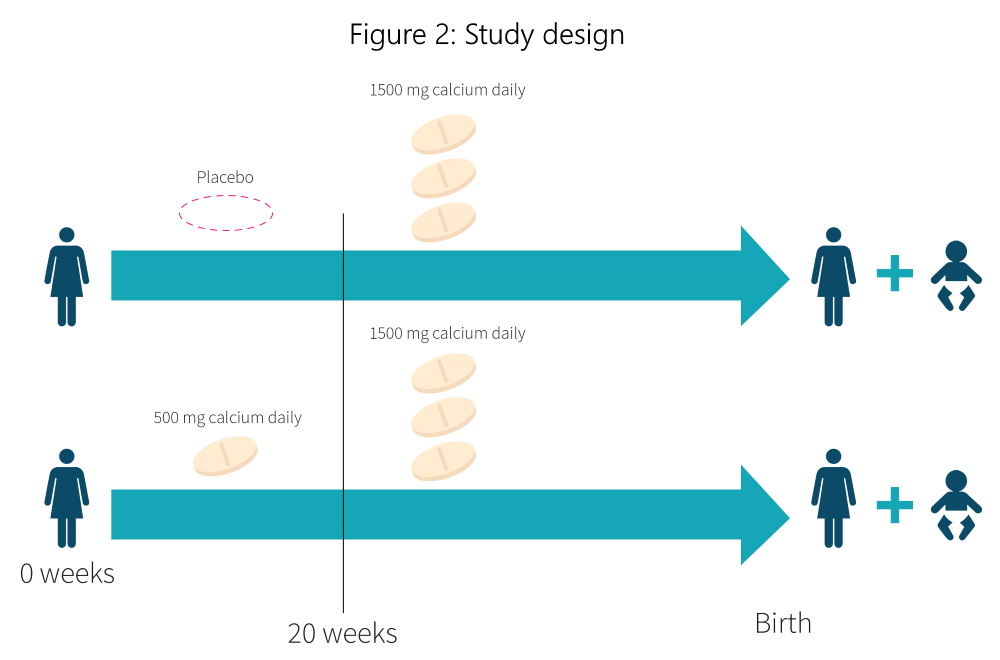 Follow-up visits were conducted every 12 weeks. Participants would return any unused supplements to the research staff for compliance assessment and leave with a fresh 12-week supply of calcium or placebo. Dietary data was collected in a subgroup of the participants (all participants in South Africa) via a triple pass 24-hour dietary recall[10].

This study had three primary outcomes: pre-eclampsia during pregnancy or in the postpartum period, pre-eclampsia or pregnancy loss before going through labor, and a severe maternal morbidity and mortality index (composite of admission to intensive care unit or any special care unit, eclampsia, placental abruption, HELLP syndrome[11], renal failure, or death). While there were initially three primary outcomes, the authors revised the protocol to specify only the first primary outcome. There were 30 secondary outcomes and no correction for multiple comparisons. Data were analyzed with an intention-to-treat and per-protocol analysis (with a greater than 80% compliance).

What is the difference between intention-to-treat and per-protocol analysis?

In randomized controlled trials there are often deviations from the protocol that can affect the way an intervention works. This can impact the results on conclusions of the study. One way to attempt to deal with how deviations from the protocol impact the results are to perform two different analyses: intention-to-treat and per-protocol analyses. Intention-to-treat analyses include all participants that were randomized to the study, whereas per-protocol analyses only include participants that followed the protocol as described. In the case of the study under review, this means participants who were more than 80% compliant to the intervention.

One would expect that a per-protocol analysis may have a higher chance of finding positive results than an intention-to-treat analysis, since people are following the intervention as prescribed. Essentially, it is an ideal case. In this study, that would mean that women who stuck to their calcium regimen well would experience a lower risk of pre-eclampsia.

The present study was a multicountry parallel arm, double-blind, randomised, placebo-controlled trial testing the effect of calcium supplementation given before and during early pregnancy (less than 20 weeks) on pre-eclampsia.

Of the 1,355 women randomized to the interventions, 651 (48%) became pregnant, and 581 (43%) had a pregnancy continuing beyond 20 weeks’ gestation between July of 2011 and October of 2017 (six years and three months). Only about half the participants took at least 80% of their pills during the most critical period of the trial, i.e. the last visit before pregnancy to 20 weeks’ gestation, and only four of every five women took at least half their pills. None of these findings were significantly different between the calcium and placebo groups. There were no serious adverse events reported due to calcium supplementation in the study.

As shown in Figure 3, for the intention-to-treat analysis, no primary or secondary outcome was statistically different between groups, except for a borderline significantly lower rate of pre-eclampsia and/or pregnancy loss before labor in the calcium group (33% vs. 41%; one of the primary outcomes).

For the per-protocol analysis of only those participants with at least 80% compliance, pre-eclampsia was significantly reduced by 34% in the calcium group (21% vs. 32% incidence).

The current study fails to provide compelling evidence that, in free-living populations, prescribing low-dose (500 milligrams) of daily calcium early in pregnancy will have a meaningful impact on hypertensive-related complications in pregnant women, especially pre-eclampsia. This study highlights adherence to a simple intervention as an issue in free-living studies in the countries that were tested, and that the effect of early calcium supplementation, if present, is likely small.

However, it’s important to emphasize that this study tested early intervention of fairly low-dose calcium (500 milligrams), and that all women in the trial received 1.5 grams from 20 weeks onward. This means that the early effects may have been overshadowed by the later, much larger effects. In other words, while this study does not provide strong evidence for early calcium supplementation’s impact on pre-eclampsia, it does not directly speak to calcium’s efficacy overall, since all women received higher-dose calcium after 20 weeks. The reason for this design is that it would be unethical to withhold calcium supplementation from 20 weeks onward. As such, all women received 1.5 grams of calcium during the later stages of pregnancy (at least 20 weeks).

There are also some other reasons not to read this study as saying there’s no effect, even for early calcium intervention. First, the present study was powered to detect only a fairly large reduction (a reduction of 25% to 15%), as such the study may have missed a positive, smaller finding. Also, among the subgroup of people who were greater than 80% adherent there was about a 34% reduction in risk, which was statistically significant, which suggests that highly adherent women may still benefit from early calcium supplementation.

It’s important to evaluate efficacy in the context of the participant population. The present study was conducted in women in developing countries, and it highlighted the difficulty to achieve adherence in these populations. However, there did seem to be a benefit in people who had high adherence (as shown by the per-protocol analysis). It can be speculated that people in developed countries who do not consume enough calcium may benefit from early calcium supplementation. Lastly, only women who already had/were at risk of pre-eclampsia were included in this study, so the study does not reveal much about how useful this intervention might be for women who are not at higher risk for pre-eclampsia.

This study did not find evidence that adding lower-dose calcium supplementation before 20 weeks gestation to pregnancy reduces the risk of pre-eclampsia or pre-eclampsia-related complications. However, it does not rule out smaller effects and also suggests that noncompliance may have played a role in the lack of positive findings.

This study was the first to look at low dose (500 milligrams) calcium supplementation in early pregnancy. However, this study’s per-protocol findings are supported by previous randomized trials[6] of calcium supplementation in the later stages of pregnancy, in which women who were given 1.5 grams of calcium daily before and during pregnancy saw a reduction in severe pre-eclampsia complications, eclampsia, and gestational hypertension. However, that study did not find a significant reduction in pre-eclampsia itself. The per-protocol analysis of the present study is also supported by a previous Cochrane meta-analysis[7] which found that supplementing with more than one gram of calcium per day reduces the risk of pre-eclampsia, especially among women with low dietary calcium intake.

Currently, the association between calcium and blood pressure remains an unsolved mystery as the precise causal mechanisms have not been fully unraveled. Sodium and potassium regulate blood pressure through fairly well-defined mechanisms, primarily in water retention (sodium) or diuretic effects (potassium). However, there are some proposed mechanisms surrounding calcium’s ability to modulate blood pressure. First, calcium can regulate vascular tone through controlling smooth muscle contractility[13] and low levels of calcium can increase vascular tone[13] leading to elevated blood pressure. Additionally, calcium levels have been shown to inhibit renin[14], which is also a key molecule in regulating vascular tone and blood pressure. This indicates that low serum calcium levels may lead to elevated production of renin. In addition to these mechanistic studies, a meta-analysis[15] has shown that calcium supplementation lowers systolic, but not diastolic, blood pressure by about 1.3 mmHg.

Calcium may exert some blood pressure modulating effects through reducing smooth muscle contractility and suppressing renin secretion. However, blood pressure during pregnancy is regulated by many mechanisms, including very large increases in blood volume that could be significantly more important than adequate calcium intakes. More work is needed to determine exactly how calcium may impact pre-eclampsia risk

Q. What are some risk factors for pre-eclampsia?

Pre-eclampsia is the leading cause of hypertension disorders in pregnancy and hypertension-related deaths among pregnant women. Calcium has been identified as an intervention that might reduce the risk of pre-eclampsia. While several randomized trials have been conducted on calcium supplementation in late pregnancy, there has not been an investigation into the effect of calcium supplementation before pregnancy and during early-stage pregnancy.

The present study did not find clear evidence that early calcium supplementation reduces the risk of pre-eclampsia, but that may be due to a lack of adherence and a small effect size given that, among those participants with high adherence (more than 80%), there was a reduced risk of pre-eclampsia by about 34%, indicating that the intervention may provide benefit if there is high adherence. These data, coupled with the various mechanisms that regulate blood pressure, suggest that calcium supplementation may provide some benefit. However, current data indicate that early, low-dose calcium supplementation it is not likely to add substantial benefit to higher-dose calcium taken after 20 weeks.