Curcumin reduces DOMS, with some caveats

What is the effect of curcumin supplementation on exercise-induced muscle damage and delayed onset muscle soreness (DOMS)?

Exercise, especially when it involves eccentric or unaccustomed[1] loading, may result in muscle pain that typically appears[2] 12–24 hours after the physical challenge, peaks between 24 and 72 hours, and progressively subsides within 5–7 days after exercise. This pain is referred to as delayed onset muscle soreness, or DOMS. While it’s not entirely clear how exercise causes DOMS, several mechanisms may contribute[3], including mechanical damage to the muscle fibers and connective tissues, and increased levels of inflammation and oxidative stress. 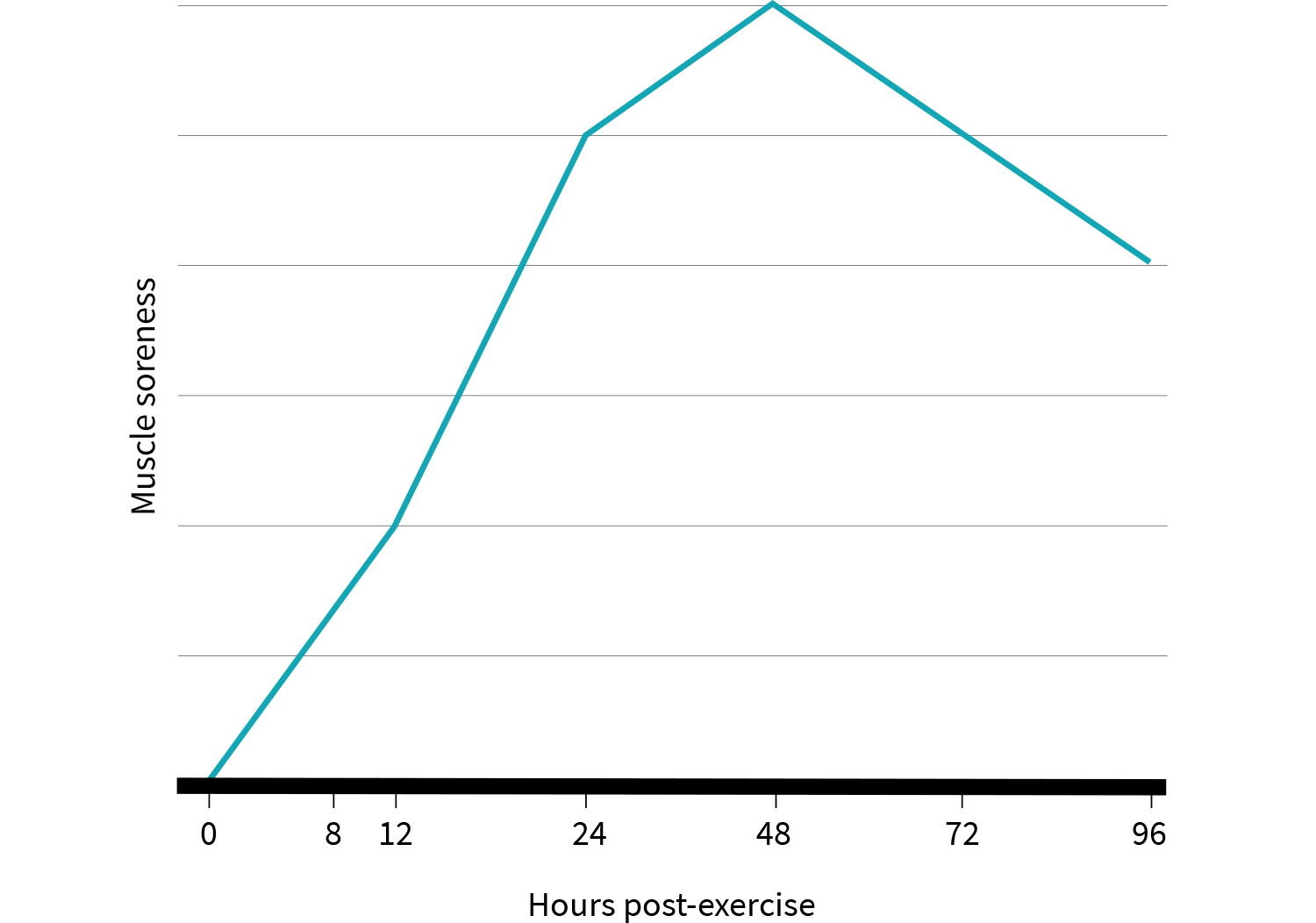 Since exercise-induced muscle damage and DOMS may hinder training performance, there’s a need for strategies that can help speed up recovery and reduce DOMS. One proposed strategy is the use of antioxidant and anti-inflammatory compounds, such as curcumin.

Curcumin is a yellow polyphenolic pigment that, potentially due to its anti-inflammatory and antioxidant properties[4], may reduce exercise-induced muscle soreness and creatine kinase levels, a marker of muscle damage. However, while several trials have examined these potential effects, their results have been inconsistent. As such, the goal of the study under review was to conduct a meta-analysis of the effects of curcumin supplementation on exercise-induced muscle soreness and creatine kinase levels in healthy adults.

While curcumin supplementation may reduce exercise-induced muscle damage and soreness, clinical trials examining these potential effects have produced inconsistent results. The study under review is a meta-analysis that investigated the effects of curcumin supplementation on exercise-induced muscle soreness and creatine kinase levels, a marker of muscle damage, in healthy adults.

The authors conducted meta-analyses of randomized controlled trials that looked at the effects of curcumin supplementation on exercise-induced muscle soreness and markers of muscle damage in healthy adults.

Ultimately, nine studies were included in the meta-analyses. Of these, seven studies (220 participants) looked at the effects of curcumin on creatine kinase (a marker of muscle damage), and six studies (159 participants) looked at the effects of curcumin on DOMS, as measured by visual analogue scale. The study participants were young (ages 19–36 years), and the majority of them were men. In five studies, the participants were trained, and in the remaining four studies they were untrained. The curcumin formulations used in the studies varied. There were a total of seven different formulations. CurcuWIN® and Theracurmin® were the most common. The dose of curcumin supplementation ranged from 150–6,000 milligrams per day, and the duration of the interventions ranged from 1–56 days, with most interventions being 4–7 days long.

In addition to the main analyses, the researchers also conducted subgroup analyses based on the time point of the outcomes assessment (less than 24 hours, and 24, 48, 72, and 96 hours), curcumin dose (no more than 180 vs. more than 180 grams per day), trial duration (less than one week vs. at least one week), training status (trained vs. untrained), and study design (crossover vs. parallel). Additionally, the researchers conducted a subgroup analysis for DOMS based on exercise type (aerobic vs. resistance exercise).

The researchers assessed the risk of bias of the included trials with the Cochrane Collaboration’s risk of bias assessment tool for RCTs. Bias was assessed as high, low, or unclear over seven domains: random sequence generation, allocation concealment, blinding of participants and personnel, blinding of outcome assessment, incomplete outcome data, selective reporting, and other. Publication bias was assessed using funnel plots. The meta analysis followed PRISMA guidelines, but was not preregistered. Outcome data were pooled using a random-effects model, and heterogeneity was tested using the I2 statistic.

In this study, researchers conducted meta-analyses to assess the effects of curcumin supplementation on exercise-induced muscle soreness and creatine kinase, a marker of muscle damage. In addition to the main analyses, researchers also conducted subgroup analyses to explore potential sources of heterogeneity, such as dosing, duration, and training status.

In the overall analyses, curcumin supplementation improved creatine kinase levels, with an average difference relative to placebo of -49 units/liter (95% CI: -81, -16), and high levels of heterogeneity detected. Curcumin supplementation also improved muscle soreness, with a reported mean difference relative to placebo of -0.48 (95% CI: -0.75, -0.20), and high levels of heterogeneity detected. The term ‘reported’ in the previous sentence is used intentionally, as centimeter units would be expected in the context of a weighted mean difference for a visual analog scale. However, the authors didn’t report units, so they may actually be reporting a standardized mean difference (SMD), which doesn’t have units. The Study Deep Dives editors reached out to the authors for clarification, but no reply was received as of publication time. Thus, for the rest of this review, assume soreness is being reported as an SMD. If that’s true, the reduction in soreness can be considered small to moderate.

In the subgroup analyses for muscle damage, curcumin improved creatine kinase only at 48 hours post-exercise, with a curcumin dose of more than 180 grams per day, in intervention durations of less than one week, in untrained participants, and in parallel trial designs. In the subgroup analyses for muscle soreness, curcumin improved DOMS at 72 and 96 hours post-exercise, in intervention durations of both less than one week and at least one week, in untrained participants, in both parallel and crossover trial designs, and only when resistance exercise was performed. As shown in Figure 2, there was a possible trend for better outcomes a few days after exercise, although there’s also a lot of error. There were moderate or high levels of heterogeneity in most of the subgroup analyses. 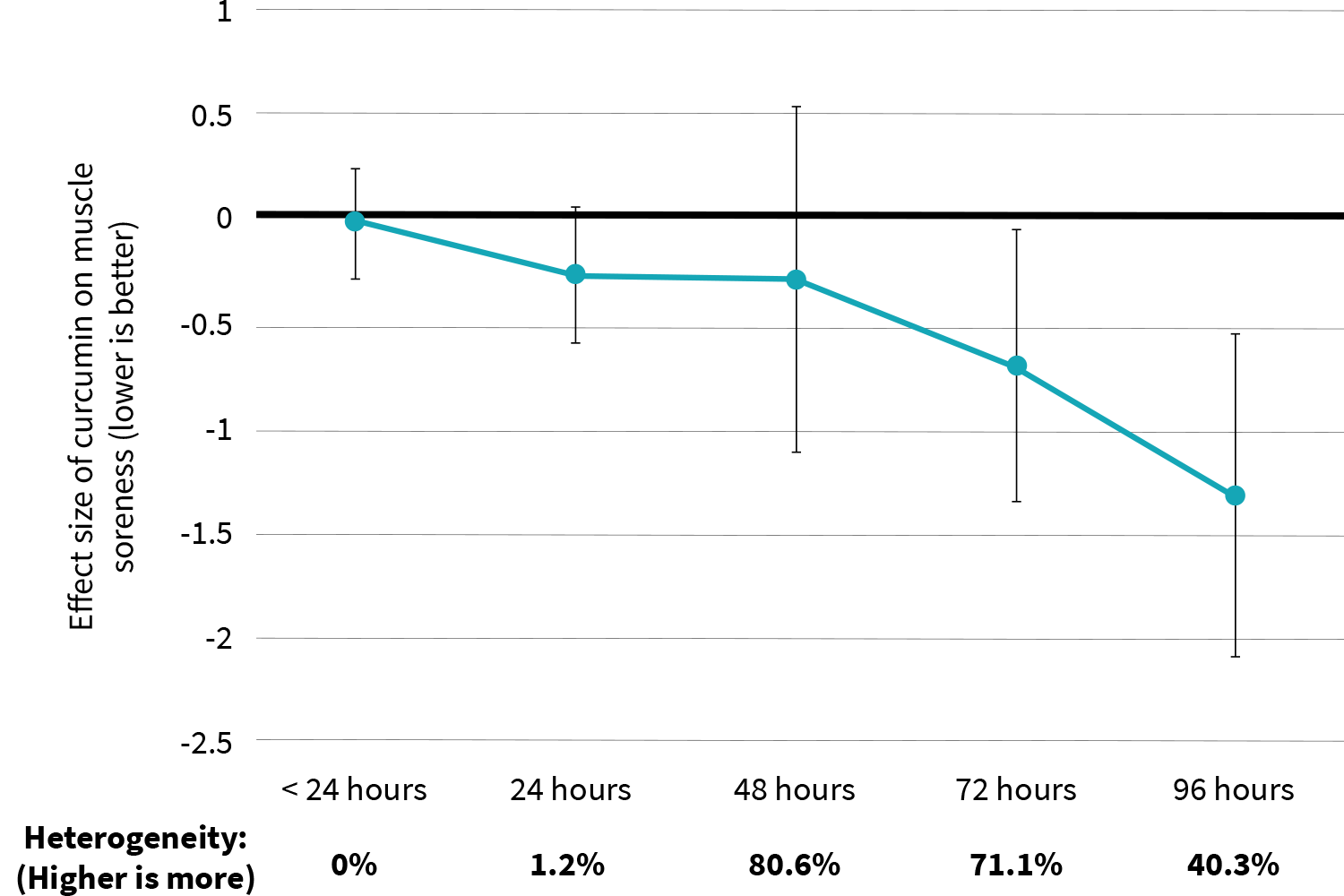 The findings of the study under review indicate that curcumin supplementation improves exercise-induced muscle soreness and reduces creatine kinase in parallel design trials, and that these effects may be more pronounced in untrained populations performing resistance exercise.

While meta-analyses generate useful quantitative data that can be used to provide information about the current state of the science on a given topic, this information is only as good as the studies included in the related meta-analysis. In this case, while the results indicate a positive effect of curcumin on exercise-induced muscle soreness and damage, more than 75% of the studies included in the meta-analysis were assessed as being of an unclear or high risk of bias in four out of the seven domains of the risk of bias assessment. This reduces confidence in the results, especially since supplementation interventions like this are easier to blind and standardize, compared to whole-diet interventions, in which it’s harder to blind and control factors. Hopefully, future trials looking at curcumin’s effects on soreness will have stronger study designs, so more solid conclusions can be made.

Another issue with the meta-analyses relates to the variability of the included studies in terms of their design. For example, some studies used trained participants, while others used untrained participants. Also, the studies varied widely in treatment duration, supplement dose, and the curcumin formulation used. The latter may be an especially important issue, as different types and formulations of curcumin may greatly influence its bioavailability[5] and, thereby, moderate its potential effects. For example, the relative bioavailability[6] of CurcuWIN® is almost 10 times higher than that of Theracurmin®. Relative bioavailability compares how much more of a compound gets absorbed compared to a reference (usually plain curcumin), adjusted for dose.

Another source of variability was study length. Recall that duration ranged from a few days to close to two months. However, most of the studies were under a week long. Thus, the results of this meta-analysis mostly speak to short-term effects.

It’s also worth keeping in mind that the creatine kinase response to exercise can vary considerably between individuals. For example, in a 2007 trial[7], the peak creatine kinase levels in response to the same full body resistance training workout varied between participants from around 2,000 up to a little over 50,000 units/liter. Such high levels of interindividual variability suggest that it’s likely inappropriate to use parallel trials to assess this marker, and that crossover trials, in which each participant serves as their own control, are the way to go. With this in mind, it makes sense that in the subgroup analyses according to study design (crossover vs. parallel), curcumin was found to be effective in parallel, but not in crossover, trials.

Finally, considering that creatine kinase levels may typically reach around 2,000 units/liter after resistance training, but can also reach, or even surpass, 10,000 units/liter, curcumin’s observed effects in the overall analysis on creatine kinase (-49 units/liter) are likely too small to be practically relevant. Assuming that the mean difference of -0.48 relative to control is the standardized mean difference, this effect size is small to medium in terms of alleviating DOMS.

Overall, considering the limitations of the meta-analysis, it’s prudent to interpret the results cautiously. Even when the results are taken at face value, the magnitude of curcumin’s effect on creatine kinase is likely too small to practically matter, while its effect on soreness itself is moderate at best.

While the results of this meta-analysis suggest that curcumin supplementation improves exercise-induced muscle damage and soreness to a statistically significant but modest degree, these results are based on heterogeneous studies with an unclear or high risk of selection, performance, and detection bias.

This meta-analysis suggests that curcumin supplementation has a positive effect on exercise-induced muscle damage that is likely too small to be of practical relevance, and a small to medium positive effect on DOMS, primarily in untrained populations after resistance exercise. That said, due to the considerable levels of heterogeneity detected in most of the analyses, and because most of the studies included in the analyses were assessed as having an unclear or high risk of bias in four out of the seven domains of the risk of bias assessment, the results of the study under review should be interpreted cautiously.