Comparing animal and plant protein in the context of resistance training

Study under review: High-Protein Plant-Based Diet Versus a Protein-Matched Omnivorous Diet to Support Resistance Training Adaptations: A Comparison Between Habitual Vegans and Omnivores

Changes in muscle mass are thought[1] to be produced by the balance between muscle protein synthesis (MPS) and muscle protein breakdown (MPB). Resistance exercise and dietary protein both increase MPS, but the MPS response to dietary protein has been shown to depend, among other things[2], on the amino acid composition of the source being ingested. In this regard, the most important amino acids for stimulating MPS are essential amino acids[3] (EAA). Unlike their “non-essential” cousins, these literally essential amino acids cannot be synthesized by our bodies. They are abundant in animal protein sources, but plant protein sources don’t contain as much. Moreover, there are differences in digestibility between animal and plant proteins, with the latter being less bioavailable[4], on average. It’s also worth mentioning that carnitine and creatine are absent from plant protein sources, and given creatine’s muscle building capacity, its absence may lead to some performance loss, as evidenced[5] by vegans benefiting more from creatine supplementation than omnivores. Putting all these factors together suggests a diet devoid of animal protein might be detrimental for muscle mass maintenance or gaining after resistance exercise. However, this hasn’t hypothesis has yet to be directly tested experimentally.

The researchers conducting this study compared the response to 12 weeks of a resistance exercise program (lower limb, twice per week) between young (26 years old), untrained, habitual vegans (average of three years following a vegan diet, n=19) or omnivores (n=19). Both groups consumed a total of 1.6 grams of protein per kilogram of body weight (g/kg) per day, which was achieved by supplementing their diet with either soy protein (vegans) or whey protein (omnivores) isolates. Supplements were given two times daily (breakfast and evening snack; typically the meals with the lowest protein intake) and diets were assessed by 24-hour dietary recalls every four weeks. Protein intake details are laid out in Figure 1. Body composition (DXA), muscle size (ultrasound and fiber cross-sectional area) and muscle strength (leg press one-rep maximum) were measured before and after the experimental period. The trial was registered retrospectively. The sample size was calculated based on the muscle cross-sectional area for the vastus lateralis, which was the primary outcome of the study, assuming a medium effect size (0.25) and power of 80%. This came out to a required sample size of 17 participants per group. 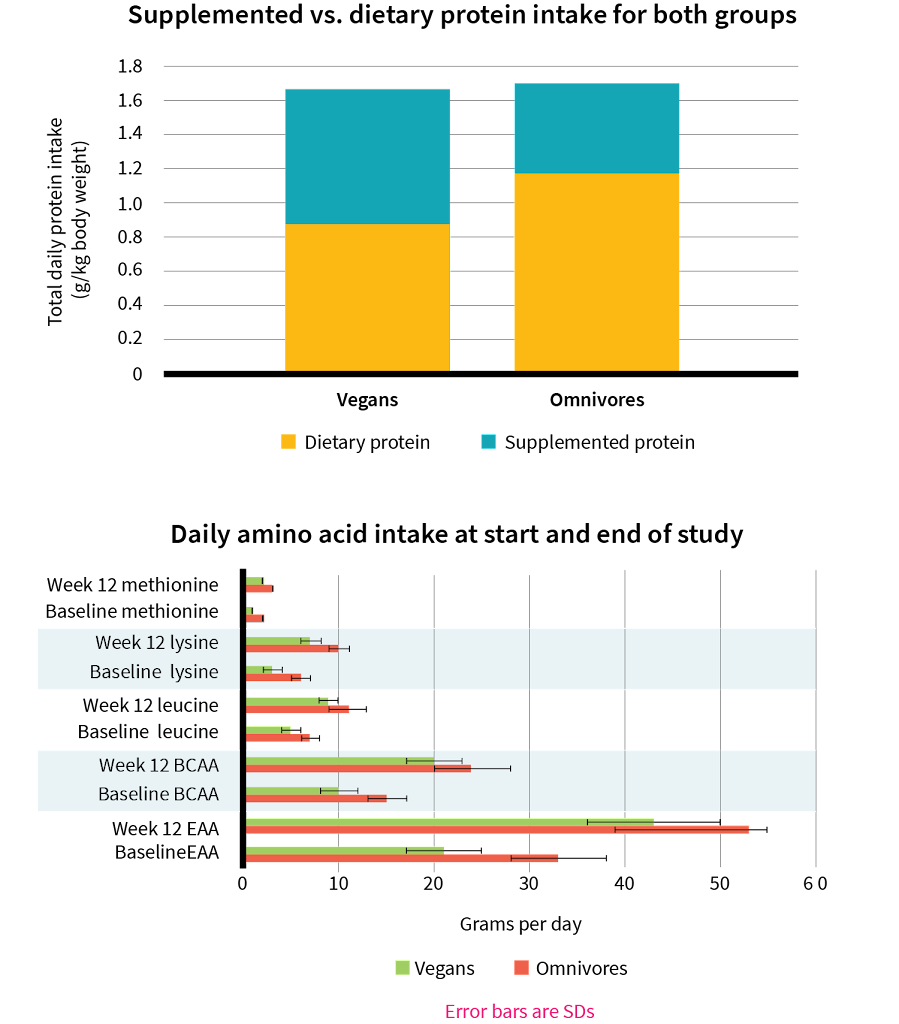 Figure 2: Mass and strength changes over the course of the study 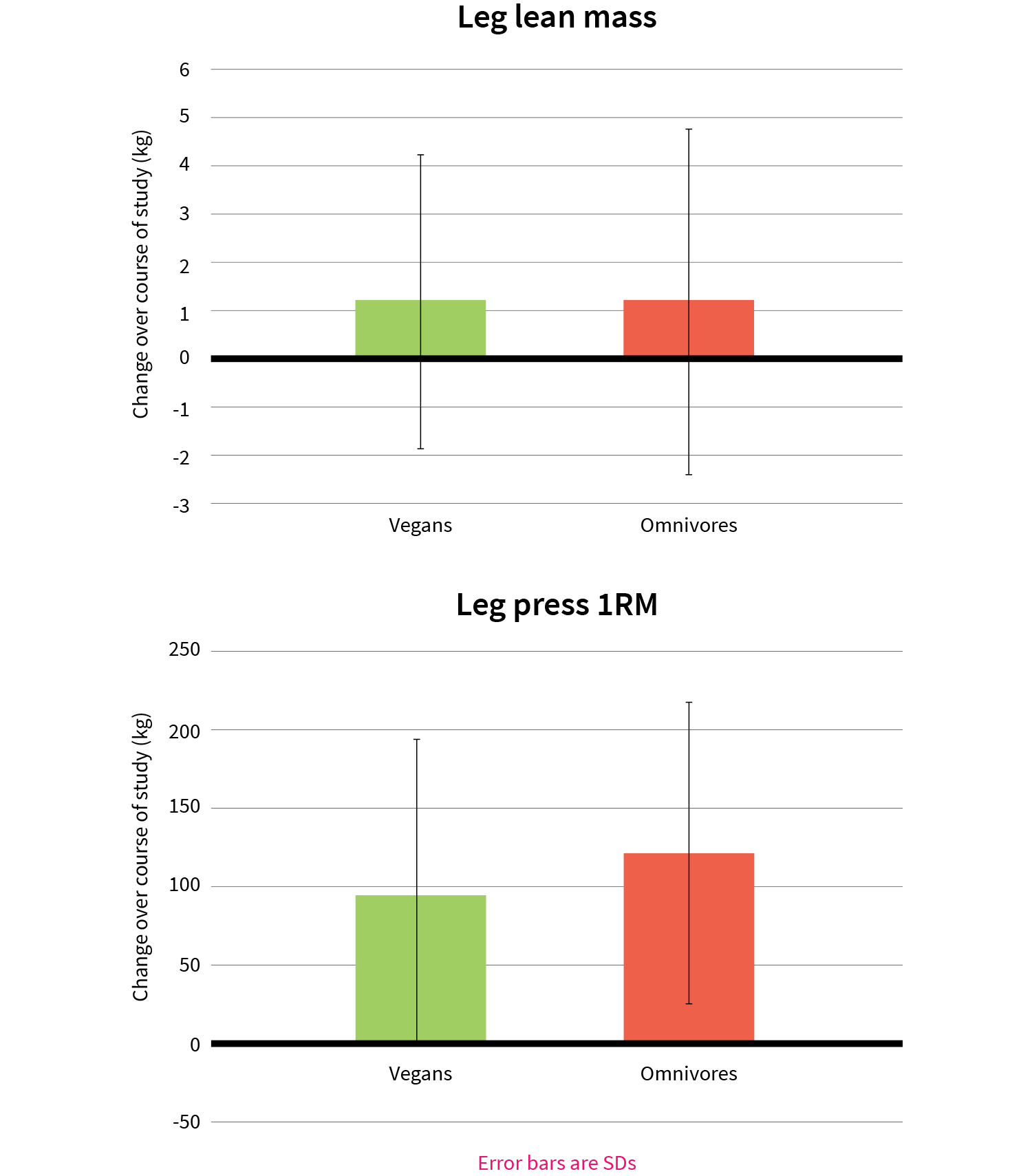 This study adds to the evidence that suggests that, when dietary protein intake is adequate (1.6g/kg, assuming all EAAs are present in adequate amounts), the total amount of protein consumed per day, rather than the specific source, is the most important factor for resistance exercise-induced adaptations. However, it is important to consider that in the vegan participants, this level of protein intake was achieved with soy protein supplementation, and not by consuming exclusively whole foods. This is of practical importance, as achieving a high protein intake with exclusively vegan foods will also tend to increase the amount of carbohydrates and fat ingested, and hence total energy, because most vegan foods high in protein are also high in these macronutrients. Moreover, the increase in bulk volume of “whole” foods might lead to gastrointestinal discomfort, and there is the potential for increasing the amount of anti-nutrients present in vegan foods, which might interfere[6] with protein digestibility. Overall, it appears that the best strategy for vegans attempting to gain muscle mass is to supplement with vegan protein supplements with good amino acid profiles, like soy protein powder. It is also worth pointing out that, at baseline, vegan participants had significantly lower and deficient vitamin D levels. This highlights the fact that, in addition to adequate protein intake, people consuming a vegan diet might have to be more careful about their food choices to avoid micronutrient deficiencies. Creatine supplementation would also be particularly useful for people following a vegan diet.

Another caveat of the current study is that it involved young untrained participants. It is possible that other populations, such as elderly people, who may experience anabolic resistance[7], might benefit from including animal food sources in their diet. Additionally, both the fact that these were untrained participants, who tend to respond rapidly to a training intervention, and that the sample size was relatively small, means the results should be cautiously extrapolated to other circumstances, if at all. The sample size was 19 participants per group, which could be underpowered to detect small differences, as there were no previous studies comparing muscle gain between vegans and omnivores. Finally, the training program only involved the lower body and was performed two times per week, and as such, is not representative of real world training programs used for increasing muscle mass.

When dietary protein intake is adequate (1.6g/kg) and is achieved through soy protein supplementation, there doesn’t appear to be any detrimental effect of consuming a vegan diet on resistance exercise-induced muscle mass and strength gains in young people.