Citrulline malate may help you pump out a few extra reps

Study under review: Acute Effect of Citrulline Malate on Repetition Performance During Strength Training: A Systematic Review and Meta-Analysis

What are the acute effects of citrulline malate (CitMal) supplementation, compared to placebo, on the number of repetitions performed to failure during resistance training in healthy adults?

Citrulline[1] (or L-citrulline) is an amino acid found primarily in cucurbits, such as watermelons, cucumbers, and other melons. Unlike arginine, ingested citrulline passes through the liver without[2] being metabolized. Instead, it is released into circulation, and then converted by the kidneys into arginine. This means that supplementing with citrulline is a more effective way of raising blood arginine levels than supplementing with arginine. By increasing[3] blood arginine levels, supplementation with citrulline can boost[4] nitric oxide (NO) production, which, through its potential effects on vasodilation[5], mitochondrial respiration[6], calcium handling[7], and glucose uptake[8], may improve exercise performance. Moreover, citrulline can potentially improve exercise performance by promoting[9] the clearance of ammonia during exercise (the build-up of which may promote muscle fatigue) through the urea cycle. 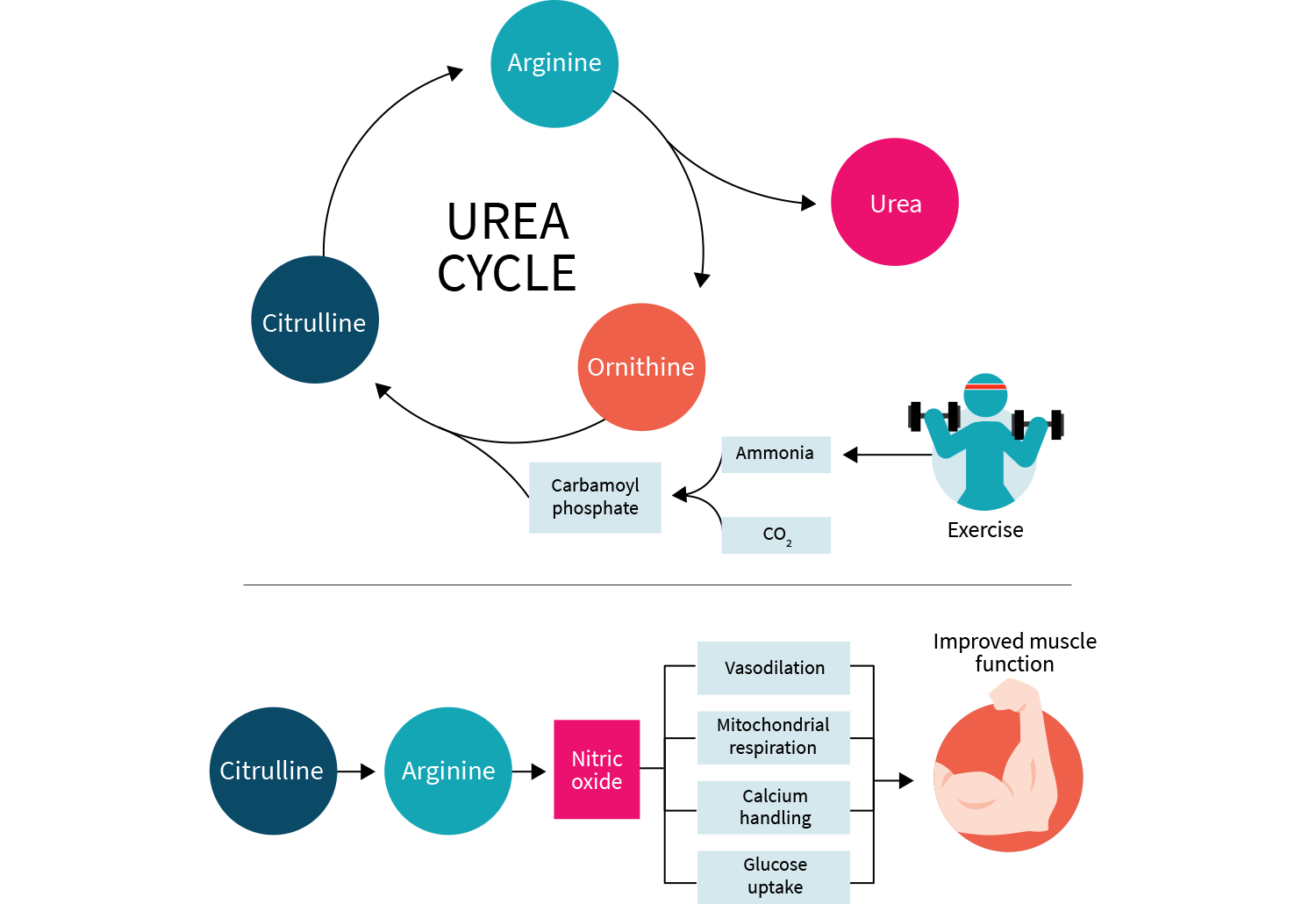 Citrulline is commonly supplemented as citrulline malate (CitMal), which is a combination of L-citrulline and malate, an ionized form of malic acid. By mitigating the production of lactic acid, and using it to form more pyruvate, malate may increase[11] aerobic energy production and create more adenosine triphosphate (ATP), thereby reducing muscle fatigue and improving muscle performance. As such, the combination of L-citrulline and malate may have additive or synergistic effects.

A 2019 meta-analysis (reviewed in Study Deep Dives #57) reported small improvements in strength and power performance with CitMal supplementation, but the analysis included different strength and power variables from resistance training and sprinting performance tests. This means that the findings cannot be used to draw clear conclusions on the effects of acute CitMal supplementation specifically on muscle endurance during resistance training (e.g., the number of repetitions performed to failure). As such, the aim of the meta-analysis under review was to fill this research gap.

Citrulline malate, the combination of L-citrulline and malate, has been reported to improve strength and power performance. However, a meta-analysis specifically examining the effects of citrulline malate supplementation on muscle endurance during resistance training would shed light on its effects.

The authors conducted a meta-analysis of eight double-blind randomized controlled trials that looked at the effects of a single dose of CitMal taken before exercise, compared to placebo, on the number of repetitions performed to failure during resistance training in healthy adults. The researchers also performed subgroup analyses to examine if a potential effect of CitMal would be more pronounced with upper-body versus lower-body exercises.

Almost all trials used loads of 60–80% of one-repetition maximum (1RM) weight, with one trial using the participants’ own bodyweight as resistance. Seven upper-body, and seven lower-body exercises were included, with the most common upper-body exercise being the bench press, and the most common lower body exercise being the leg press. The participants performed 3–10 sets of the exercises to voluntary failure, which resulted, on average, in 51 total repetitions for each exercise.

The researchers used a modified version of the “Tool for the assEssment of Study qualiTy and reporting in EXercise” (TESTEX[12]) to assess the quality of the trials. The maximum score was 11 points, with scores of 9–11 points considered high quality, 6–8 points considered good quality, and no more than 5 points considered low quality.

To analyze the data, the authors used a random-effects model to pool the weighted estimation of standardized mean differences (SMD) across trials. The SMD is used to pool the size of the effect across studies that used different measurement methods, with 0.2 defined as small, 0.5 as moderate, and 0.8 as large. Heterogeneity was tested using the Cochran’s Q test and I2 statistic, and publication bias was tested with Egger’s regression test and the trim and fill analysis[13]. The meta-analysis followed PRISMA guidelines, but was not preregistered.

This meta-analysis of eight double-blind randomized placebo-controlled trials examined the acute effects of supplementation with 6–8 grams of citrulline malate taken 40–60 minutes before resistance training on the number of repetitions performed to failure in 137 young healthy adults. In addition to the main analyses, the researchers also conducted subgroup analyses to examine the effects of citrulline malate on upper-body and lower-body exercises separately.

The Egger's test showed a tendency for potential publication bias. When the trim-and-fill method was used to adjust for publication bias, the effects of CitMal on the total number of repetitions performed became statistically non-significant, with an SMD of 0.10.

According to the trial quality assessment, all trials were assessed as being of high quality.

CitMal supplementation had a small positive effect on the average total number of repetitions performed by participants. However, this effect became statistically non-significant when upper-body and lower-body exercises were examined separately. Also, the effect of citrulline malate became statistically non-significant when one trial was removed from the analysis, and when the trim-and-fill method was used to adjust for publication bias.

The study under review is the first meta-analysis to examine the acute effects of CitMal supplementation specifically on the number of repetitions performed to failure during resistance training. The results of the main analysis suggest that supplementation of about 8 grams of CitMal about 60 minutes before resistance training in young, healthy, resistance-trained adults can have a small effect on increasing the total number of repetitions performed to failure. It’s worth pointing out that the small effect size detected in the study corresponds to three extra repetitions in total for all sets of a given exercise (i.e., three extra repetitions out of a total of an average of 51 repetitions).

Second, when the trim-and-fill method was used to adjust for publication bias, the effects of CitMal on the total number of repetitions performed became statistically non-significant. The trim-and-fill[15] method aims to estimate potentially missing studies due to publication bias (i.e., where studies with negative results are less likely to be published) and adjust the overall effect estimate. In the case of the meta-analysis under review, the trim-and-fill method rendered the effects of CitMal statistically (and clinically) non-significant. This reduces confidence in the results of the main analysis.

Third, the 95% confidence intervals of the SMDs for the main analysis were between 0.03 and 0.36. This means that the real effect size of CitMal supplementation can range from practically irrelevant to small–moderate.

Fourth, out of the eight trials included in the meta-analysis, only three tested the quality of the CitMal products used. Out of these three trials, two reported a lower content of citrulline (-21% in one trial[16], and -30% in the other trial[17]) than what was specified on the label. This suggests that there is a possibility that the real dose of citrulline used in other trials may have been lower than intended, resulting in suboptimal doses, and potentially leading to overall smaller effect sizes.

With regard to the subgroup analysis, the effects of CitMal supplementation became statistically non-significant when examined separately for upper-body and lower-body exercises. One potential explanation for these results is that the small number of trials in each of the subgroups resulted in a reduction in the statistical power required to detect the (already weak) effects of CitMal supplementation. This point is further supported by the fact that the overall number of participants included in the meta-analysis was quite small (n=137). As you can see by inspecting the 95% confidence intervals in Figure 2, the evidence is still mostly consistent with a small effect for both upper and lower body exercises, even if it is not technically statistically significant.

Figure 2: Overall results, and results split up into upper and lower body exercises 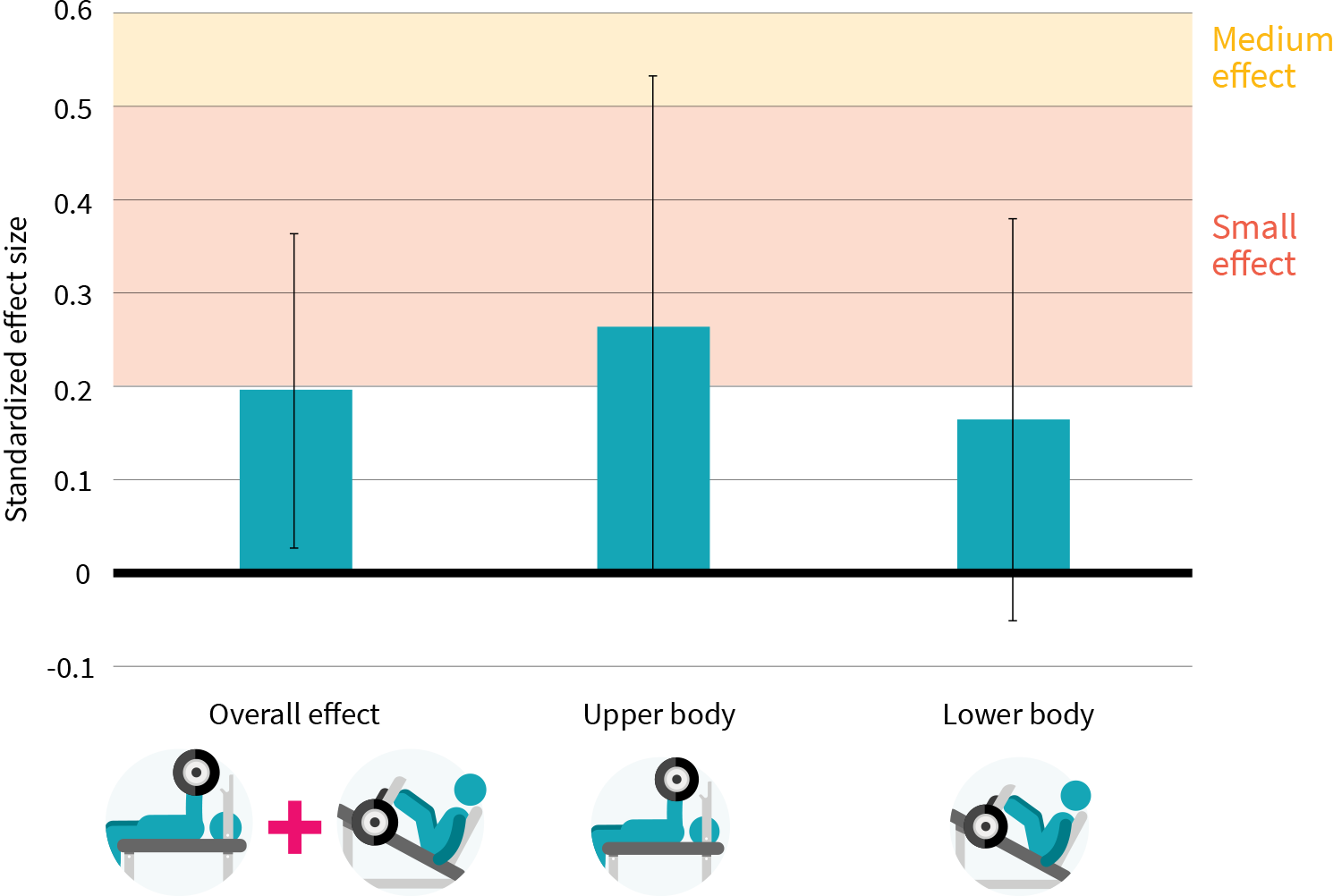 One last issue worth mentioning is the generalizability of the results. Since the outcome of the meta-analysis was the total number of repetitions performed to failure with loads of 60–80% of 1RM, these findings cannot be generalized to performance outcomes unrelated to muscle endurance. Moreover, as the participants comprised almost entirely young men with some strength-training experience, the results cannot be generalized to older adults, untrained individuals, or women. Finally, the observed acute effects of CitMal supplementation on performance do not necessarily translate to improvements in long-term training adaptations.

Overall, with the strengths and limitations of the study in mind, it’s fair to say that supplementation with around 8 grams of CitMal about 60 minutes before resistance training in young, healthy, resistance-trained men will have an effect on increasing the total number of repetitions performed to failure that may range between practically irrelevant and small–moderate.

The inclusion of only high quality randomized, double-blind, placebo controlled trials, the adherence to PRISMA guidelines, and the use of a random-effects model to pool the data of the trials increase confidence in the findings, while issues relating to publication bias reduce confidence in the results.

The results of this meta-analysis suggest that supplementation with around 8 grams of CitMal around 60 minutes before resistance training in young, healthy, resistance-trained men can increase the total number of repetitions performed to failure by around three extra repetitions out of an average of 51 total repetitions across all sets of a given exercise. Moreover, this effect may range from practically irrelevant to small–moderate. While the results of the subgroup analyses did not report statistically significant effects on either upper-body or lower-body exercises alone, this is likely due to the small number of small-scale trials included in each subgroup.