Can restless legs be ‘ironed out’?

Study under review: Iron for the treatment of restless legs syndrome.

Restless leg syndrome (RLS)[1] is a neurological disorder characterized by uncomfortable sensations in the legs and momentary relief upon movement. The sensations, which are commonly reported[2] as electrical, prickling, burning, tingling, and itching, typically worsen at night, when individuals are more likely to rest. This can be incredibly disruptive to sleep quality, which is why RLS is also classified as a sleep disorder[3].

The condition is estimated to affect 10% of the U.S. population and, as you can see in Figure 1, is more prevalent in women[4] than in men. It’s also more prevalent in individuals of western European descent[5] than those of Asian descent. Researchers believe that there is a strong genetic[6] basis to RLS, since individuals with a family history of RLS are also very likely to have the disorder. Genome-wide association studies[7] have identified variants in six different genes linked to RLS. While much remains unknown, some of these genes have been linked to the development of neurons[8]. 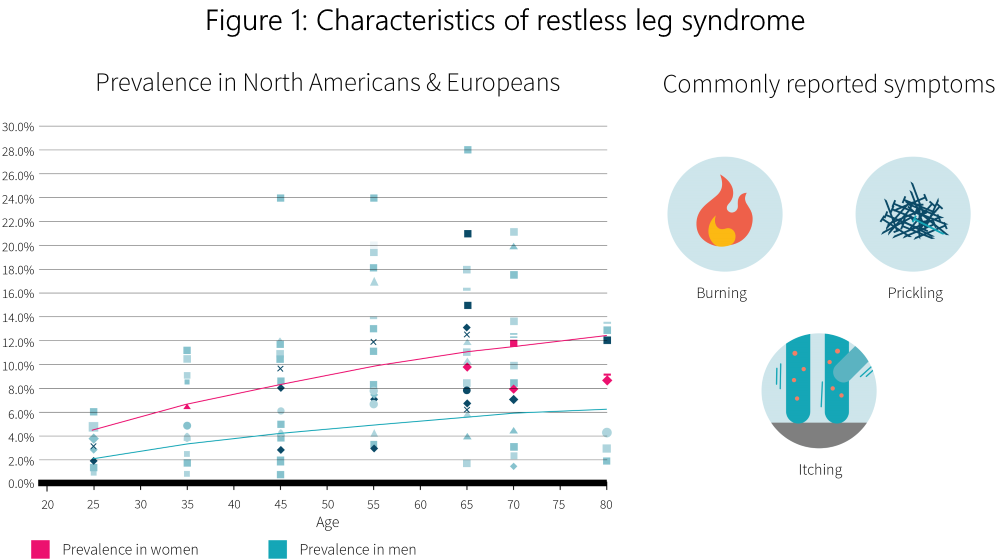 Despite this, much evidence[9][10] suggests that dysfunctions in the basal ganglia and in dopamine-producing neurons play roles in the pathology of RLS. These areas are responsible for controlling smooth muscle, which is involved in controlling involuntary movements like those in the digestive tract. Dysfunctions in the brain regions that control these muscles can lead to disruptive involuntary movements. More evidence to support the role of dopamine dysfunction in RLS comes from individuals with Parkinson’s disease, a degenerative condition in which dopamine-producing cells in the brain die at a rapid rate. These individuals are also more likely[11] to develop RLS.

The American Academy of Sleep Medicine has recommended[12] dopamine agonists (drugs that activate specific dopamine receptors) as evidence-based treatments for RLS in its clinical practice guidelines. A 2011 Cochrane systematic review[13] and meta-analysis of 38 randomized controlled trials found that dopamine-agonists were effective in reducing symptoms of restlessness in individuals with RLS, when compared to placebo. However, participants taking dopamine agonists also had an 82% higher chance of experiencing adverse events, which may make such treatments undesirable for some. Adverse effects such as worsening symptoms over the long term (called “augmentation”) and an increase in impulse control problems led the Restless Leg Syndrome Foundation to downgrade dopamine agonists to a second-line choice for therapy in 2021.[14]

Researchers have also looked to the role of iron[15] in the pathology of RLS, since iron is a cofactor for an enzyme involved in the production of dopamine and because people with iron deficiencies have a higher frequency[16] of RLS. Furthermore, there seems to be an association between the severity of iron deficiency[17] and the severity of restlessness in RLS. It’s also hypothesized that central nervous system iron deficiency[18] contributes to the dysfunction of dopamine in the brain.

Several randomized trials over the years have found improvements in RLS after iron supplementation. However, the American Academy of Sleep Medicine concluded that iron supplementation was not shown to be effective for RLS. These conclusions were based on a systematic review[12] and meta-analysis conducted in 2012, but since then, several randomized trials have investigated the effects of iron on RLS. The current study aimed to update the conclusions of previous reviews by taking into account the data from more recent trials.

Restless leg syndrome is a neurological disorder that results in uncomfortable sensations in the legs that are temporarily relieved by movement. Symptoms typically get worse at night and can affect sleep quality. Dysfunctions in dopamine transmission and deficiencies in iron are believed to be involved in the pathology of the condition. Iron supplements have shown some promise in individual clinical trials, but large reviews in the past have concluded that there was no benefit. The current review is an update of previous reviews and takes into account more recent clinical trials.

This was a systematic review and meta-analysis by the Cochrane Collaboration, which investigated the effects of iron supplementation on outcomes of restless leg syndrome (RLS). The authors of the review searched several databases for clinical trials that were published between 1995 and 2017.

Studies were included if they were randomized or nonrandomized, if they were parallel-group or crossover trials, if they compared iron supplements to placebo, drugs, or no treatment, and if they allowed equal usage of dopamine agonists or anticonvulsants in both the treatment group and the control group.

The primary outcome was restlessness or unpleasant sensations, while secondary outcomes included quality of life, sleep quality, number of limb movements per hour during sleep, daytime functioning, and decreased augmentation. Safety of the treatments was assessed by the number of adverse events during treatment.

How exactly can restlessness be measured?

Restlessness was measured in most studies by the International Restless Leg Scale (IRLS)[19], which is a questionnaire producing scores from 0 to 40, with higher scores indicating more severity of restlessness. Previous researchers have suggested[20] that a reduction of 2.9-3.2 points greater than placebo is clinically meaningful.

This was a systematic review and meta-analysis that investigated the effects of iron supplementation on outcomes related to restless leg syndrome, such as restlessness, quality of life, and sleep quality. A total of ten randomized controlled trials were included in the review, most of which were two to four weeks in duration, with the longest trials being 12-14 weeks. With the exception of one study, which compared iron to a dopamine agonist, all the other studies compared iron supplementation to placebo. Seven of the included studies used intravenous iron while three used oral iron supplements.

A pooled analysis of seven studies with a total of 345 participants showed that iron supplementation resulted in a statistically significant 3.78 point reduction in the International Restless Leg Scale (IRLS) when compared to placebo. The certainty of these effects was rated by the reviewers as being moderate.

The effect of iron supplementation on quality of life was mixed. One analysis combined data from two studies with 39 participants, used dichotomous outcomes (improved/worsened), and found no statistically significant difference, while the other, which focused on continuous outcomes and pooled data from three studies with 128 participants, did. The reviewers rated the certainty of this evidence as being very low.

In this meta-analysis, iron supplementation had a 3.78 point reduction in the International Restless Leg Scale (IRLS), and received a moderate GRADE rating from the reviewers, indicating that there was moderate confidence that this estimate was correct, but that there was also a possibility that the true effect size could be different.

This possibility is supported by the results of the sensitivity analysis, which found that excluding studies at high risk of bias led to the overall effect shrinking by about 38%, although it remained statistically significant. In addition, there was a high amount of variance between studies (heterogeneity), which can reduce the robustness of the overall effect.

Despite this issue, it is clear that the overall effect is clinically meaningful, given that in the past, authors have proposed[20] that a 2.9-3.2 point larger decrease than placebo in the IRLS is noteworthy. However, as mentioned before, excluding low-quality studies shrinks this effect substantially (38%) and may no longer make it clinically meaningful. Further research is necessary to substantiate the overall effect.

This is particularly notable with the risk of adverse events and quality of life. For risk of adverse events, there was no statistically significant difference between groups. However, there was a 48% higher risk in the iron group and the confidence interval seems to suggest that if there was a larger sample size, the result may have been statistically significant. Furthermore, five of the six trials in the analysis used intravenous iron supplementation and only one used oral iron supplements, which are known to produce gastrointestinal side effects[21]. Thus, there may simply be limited data on side effects. The vast majority of the trials were also quite short, with most of them lasting two to three weeks.

Although iron supplementation shows meaningful effects for restlessness and promise for several other outcomes associated with RLS, the results of this meta-analysis are still somewhat limited due to the high amount of heterogeneity and limited data for many of the outcomes. The overall effect also seems to shrink when low-quality studies are excluded.

Dopamine agonists are currently some of the most powerful evidence-based treatments[12] for restless leg syndrome (RLS) and, as shown in Figure 2, their effects are greater than proposed minimal clinically significant effects[20]. For example, the drug rotigotine has been shown in a meta-analysis[13] to induce a seven-point larger decrease in the International Restless Leg Scale (IRLS) than placebo. 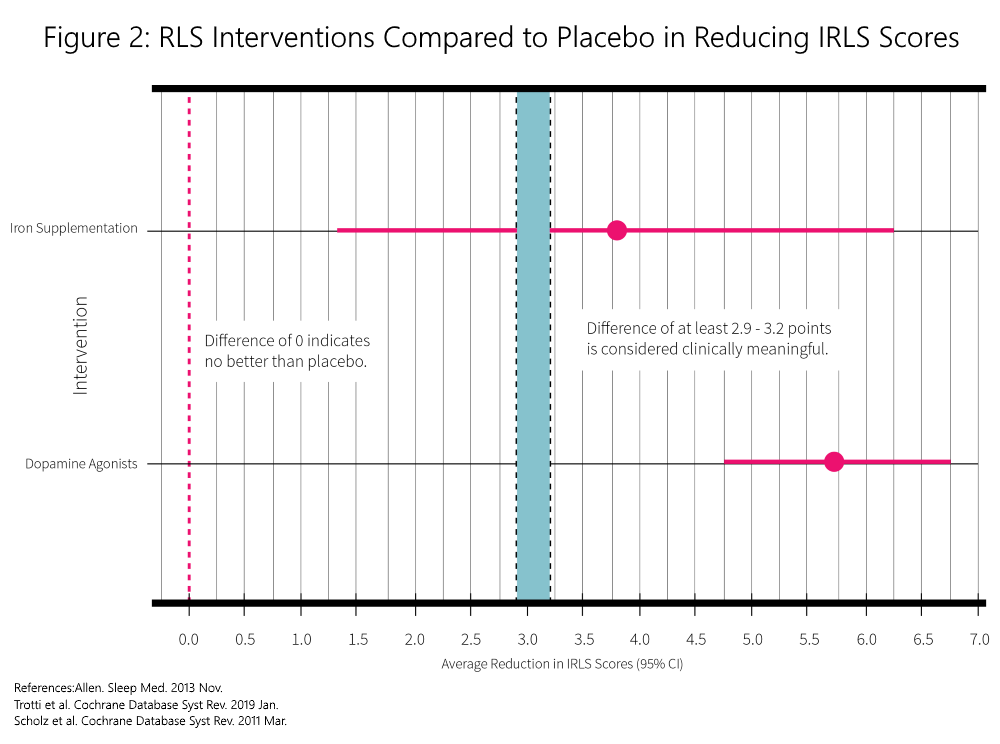 The drawback of using such drugs is that they have not been studied in the long term, they are known to increase the risk of adverse events, and they can potentially make symptoms of RLS worse with higher doses[22].

Iron supplementation holds much promise for treating leg restlessness and its effects seem to be clinically meaningful. It also doesn’t seem to have as large of an increase on the risk of adverse events as dopamine agonists. However, it too has not been studied for extended periods of time, with some of the longest randomized trials having a duration of only 12-14 weeks. It also holds much promise for many other outcomes associated with RLS, but there are currently insufficient data to recommend it for such purposes. Larger randomized controlled trials are needed to assess whether iron supplementation is effective for RLS outcomes, as well as optimal dosages and type of supplementation.

Dopamine-agonists are effective treatments for RLS. However, they can increase the risk of adverse events and potentially worsen symptoms of RLS with higher doses. Iron supplements are a promising treatment for restlessness and some other outcomes associated with RLS. Unfortunately, there is still not enough data to make strong conclusions about its long-term effects on health.

Q. What side effects are caused by iron supplementation?

Q. Are there any alternative therapies for restless leg syndrome besides dopamine agonists and iron supplementation?

One systematic review[23] found that exercise training, light therapy, transcranial magnetic stimulation, and acupuncture may relieve symptoms of restless leg syndrome. However, the number of trials for these interventions is quite low, as is the quality of the evidence. You can see the relative strength of the evidence for different RLS interventions in Figure 3. 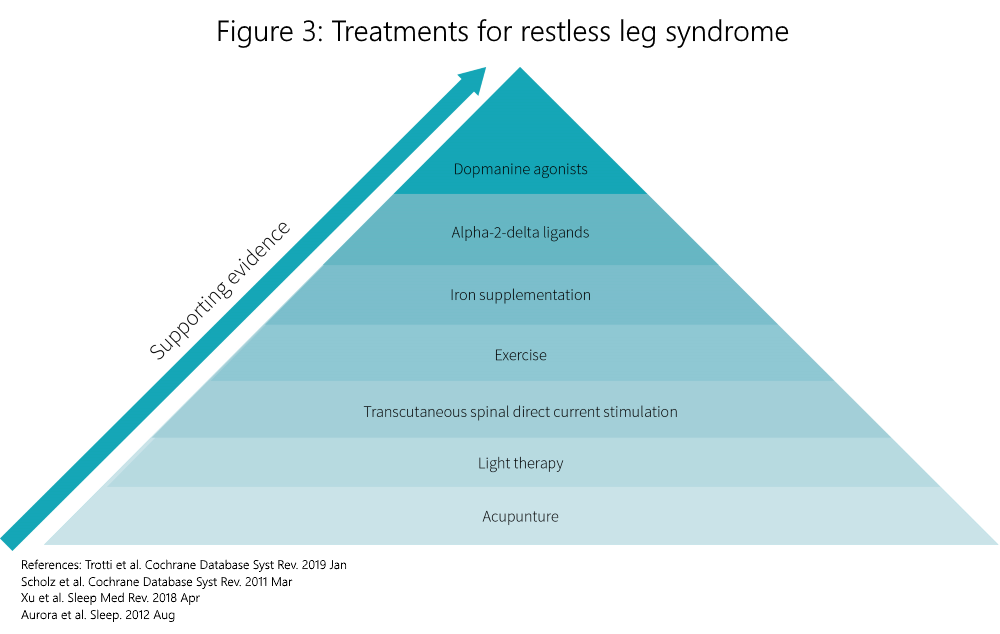 Iron supplementation (65 milligrams of elemental iron, taken orally twice a day) was found in this systematic review and meta-analysis to have a clinically meaningful impact on restless leg syndrome (RLS) and may be a possible alternative to dopamine agonists. The certainty of the evidence is currently moderate, meaning it’s possible that the true effect could differ. Due to the small number of studies and short duration, more data is needed before any strong conclusions can be made about long term use of iron supplementation for RLS.