Can mice get cancer from steak?

Red meat is one of the foods the media loves to hate, perhaps while still secretly loving it. Any time new research is published that deals with red meat consumption and X (where X might be cancer, heart disease, diabetes, etc.) the major news outlets pick it up, running scary headlines to attract clicks. The science, however, is typically a bit more nuanced than the bold claims of news headlines would lead the average reader to believe. So is there actually anything to worry about when eating red meat?

There is a modest[1] but consistent[2] correlation between diets high in red meat and cancer risk in human epidemiological studies. Scientists haven’t been able to figure out why this link exists yet, or if the risk is increased by red meat directly or through some other related factor. A number of hypotheses have been proposed[3]: grilling red meat creates dangerous compounds, the iron in red meat generates free radicals, or people that eat more red meat are more likely to engage in other diet and health behaviors that promote cancer, such as a high fat or low vegetable diet[4] (which is largely based on correlational findings). So far, there isn’t enough substantive proof to hold any of these reasons up as the definitive cause of the increased cancer risk.

Although there is no definitive proof, the collection of mechanisms, human biomarker RCTs, animal studies, and observational studies do see to support the hypothesis that red meat increases digestive cancer risk. Since there probably will never be a human RCT with red meat as a variable and colorectal cancer as an outcome, we’re unlikely to be able to assess causality in humans.

This particular paper attempted to explain one possible mechanism involved in the meat-cancer correlation from an immune response standpoint. Our simplified images of a cell typically depict a roundish circle denoting the cell membrane, with a bunch of stuff inside the cell. In reality, cell surfaces are covered with different kinds of molecules sticking out from the cell membrane. Many of these molecules are long sugar chains made up of units called monosaccharides. The researchers looked at a particular group of monosaccharides called sialic acids, which are linked into larger structures known as glycans.

The two sialic acids of interest were n-acetylneuraminic acid (denoted Neu5Ac) and n-glycolylneuraminic acid (denoted Neu5Gc), which are seen in Figure 1. Structurally, these two molecules are identical except for an additional hydroxyl (-OH) group on Neu5Gc. These molecules are found in a lot of animal-based dietary sources in different levels, with beef and caviar having the highest levels of Neu5Gc. 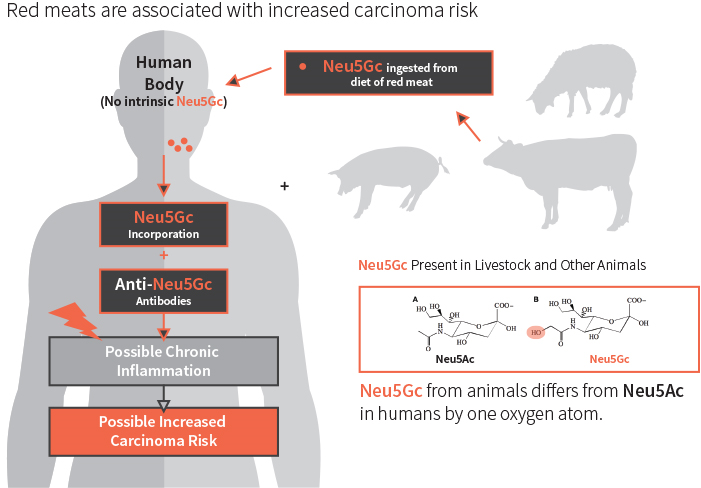 Neu5Gc is interesting, because it’s not something that humans can synthesize from Neu5Ac - the gene that codes for the enzyme needed to add on the hydroxyl group had a sequence deletion several million years ago and thus is nonfunctional. This likely conferred several evolutionary advantages. First, it may have been a factor in our ability to increase our brain development[5] beyond that available to our primate cousins. Second, certain pathogens such as select strains of malaria[6] as well as an E. coli toxin[7] bind to Neu5Gc, so lacking the enzyme necessary to synthesize Neu5Gc would have provided a resistance advantage for these diseases many millennia ago.

Despite this genetic change, Neu5Gc is still found in low levels in normal human tissue[8] - so any molecules would have to come from dietary sources and then be incorporated into our own cell membranes. It’s also found in higher levels in malignant tissue[9]. The researchers speculated that because this molecule is “foreign” to our bodies, our immune systems would react to it by producing antibodies to attack it. Indeed, it has been shown that 85% of people tested[10] had antibodies against Neu5Gc. It is not known why 15% of the people tested did not possess the antibodies.