B vitamins on the brain: Do they improve mental health?

Study under review: A Systematic Review and Meta-Analysis of B Vitamin Supplementation on Depressive Symptoms, Anxiety, and Stress: Effects on Healthy and 'At-Risk' Individuals.

Mood disorders represent a category of mental illness that impact a person’s persistent emotional state. They affect nearly 21% of all adults in the U.S. at some point during their lives. The emotional states that mood disorders affect include depression, stress, and anxiety. Over the past several decades, there has been an increasing awareness about the relationship between diet and mental health, including mood disorders.

B vitamins have received extra attention as a dietary component of mood disorders because of their relationship[1] to brain function. B vitamins play a role in brain chemistry, specifically related to mood, as they act as cofactors ultimately necessary for the synthesis of dopamine and serotonin, as shown in Figure 1. These neurotransmitters are both key components in regulating mood. Supplementation with B vitamins has a good safety profile and may have a lower risk of side effects than antidepressants. 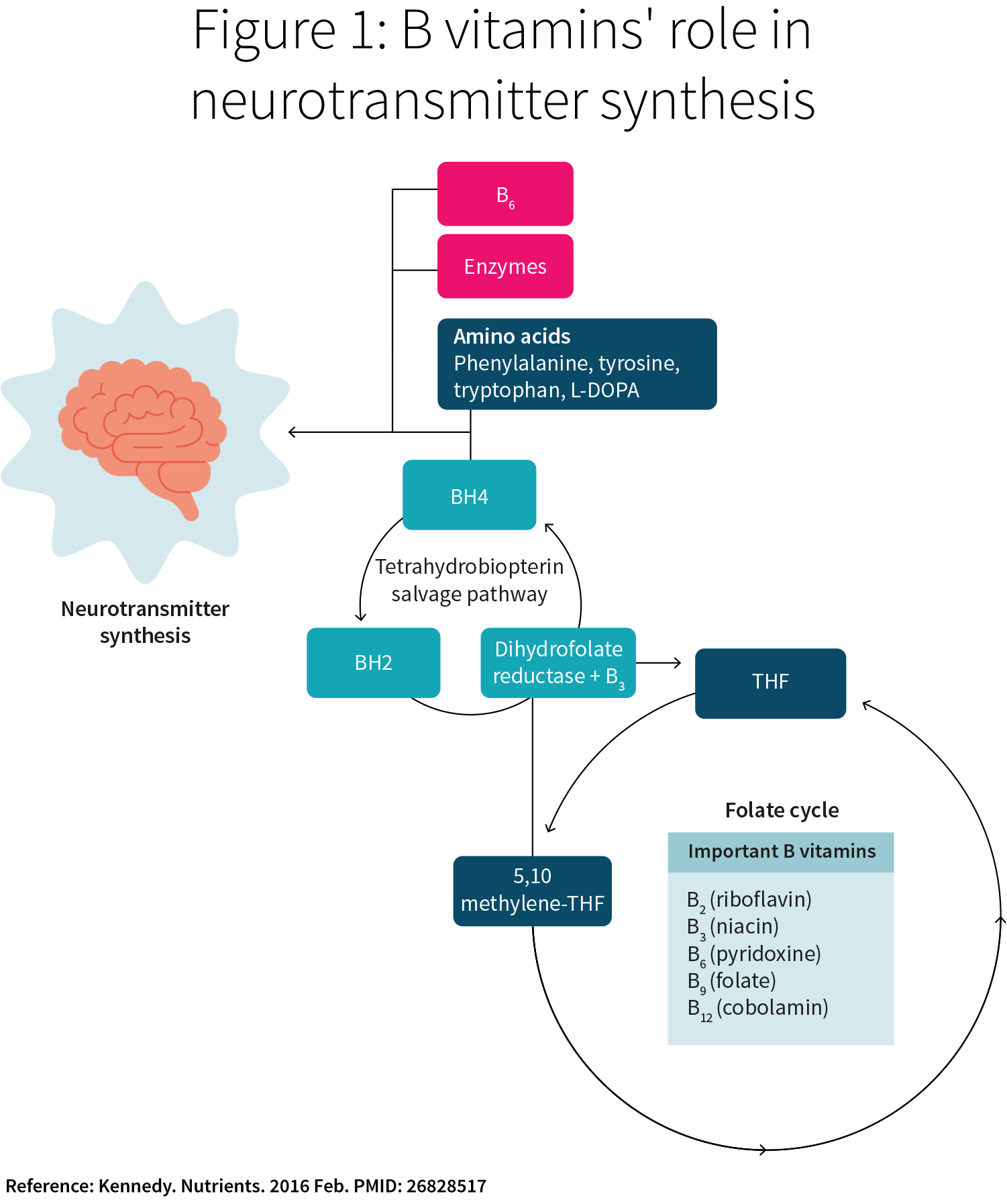 There have been several investigations into the effect of B vitamin supplementation on many aspects of mood. For example, randomized controlled trials have shown that B vitamin supplementation improves depression[2], anxiety[3], and work-related stress[4]. However, not all studies[5] have shown benefit. As such, there is a need to examine the literature in a broader scope to understand the effect B vitamins might have on mood disorders. The present study was a systematic review and meta-analysis of randomized controlled trials examining the effect of B vitamins on mood.

B vitamins are critical components in the synthesis of neurotransmitters that regulate mood, such as dopamine and serotonin. Previous studies have yielded mixed results on the effects of vitamin B supplementation on mood disorders. The present study was a systematic review and meta-analysis of randomized controlled trials examining the effect of B vitamins on mood.

The study under review was a systematic review and meta-analysis of randomized controlled trials examining the effect of B vitamins on mood. The study followed PRISMA guidelines, but does not appear to have been preregistered. The study included randomized trials with human participants that reported quantified mood outcomes (i.e. stress, well-being, and fatigue) and that were published during or after the year 2000.

Studies that were included in the analysis had to involve daily supplementation with three or more B group vitamins and be at least four weeks in length. Studies were allowed to include other vitamins and/or minerals in addition to the B vitamins, as well as other types of supplements. Only studies involving non-clinical adult populations (older than 18 years of age) were included. Participants were either healthy or at risk for mood disorders. At-risk was defined as having a nutritional deficiency, elevated levels of a psychological mood measure, subclinical symptomatology, or vulnerability to mood disorders.

Standardized mean differences and 95% confidence intervals were used to report results. Heterogeneity was assessed using the Cochran Q statistic and I2 value. The authors utilized funnel plots to identify potential sources of heterogeneity if an I2 value was at least 75%. 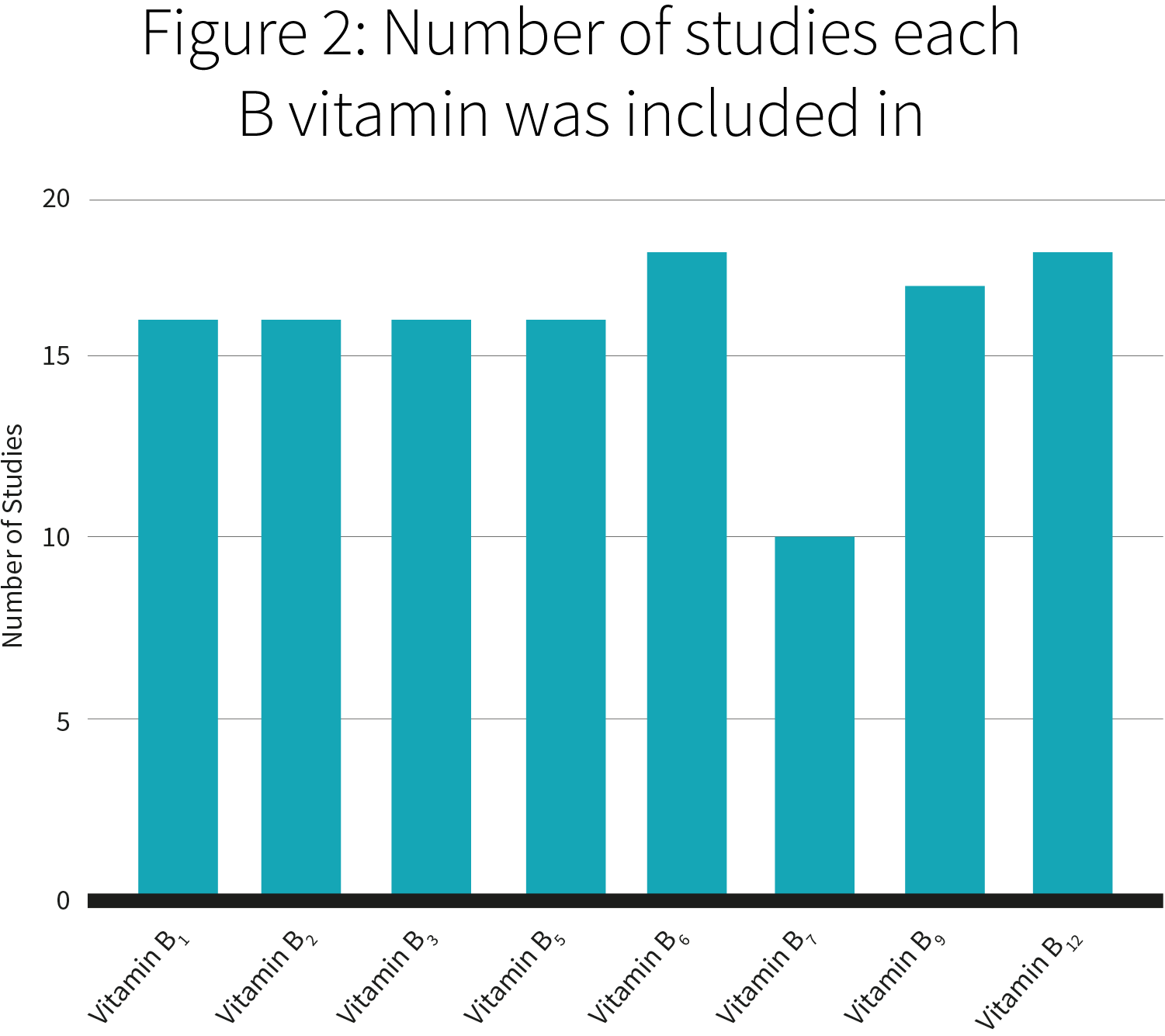 This meta-analysis examined the effects of B vitamins on mood in healthy and at risk populations without clinical mental disorders. There were 12 studies included in the analysis and the doses ranged from 2 to 300 times the recommended daily intake of the Australian National Health and Medical Research Council.

The effect of B vitamins on overall mood (defined as a measure of mental health or current state of psychological well-being) and subcomponents of mood, including stress, well-being, and fatigue, was reviewed qualitatively by the authors, as enough quantitative data was not available on overall mood for meta-analytic approaches. The qualitative review determined that there were mixed effects of B vitamins on mood, with some studies showing a benefit and others showing no effect.

Stress was measured in 10 of the 18 studies, with seven of the 10 utilizing the Perceived Stress Scale (PSS), which measures the degree to which situations in one's life are appraised as stressful[7]. The meta-analysis revealed that supplementation with B vitamins significantly reduced stress symptoms, with a small effect size (SMD = 0.23). However, there was moderate heterogeneity across studies (I2= 60%).

Anxiety was measured in 10 of the 18 studies. Individual studies did show some benefit, while other studies did not. The meta-analysis found that there was no significant benefit of B vitamin supplementation on anxiety.

The current systematic review and meta-analysis suggests supplementation with B vitamins does not substantially improve overall mood, but may offer a small benefit for reducing stress. These data also indicate that B vitamin supplementation is likely an effective way to increase circulating levels of B vitamins. However, given the high levels of heterogeneity present, the wide range of doses and types of B vitamins, and the presence of other nutrients in some studies, it is difficult to discern a true effect in the present study. 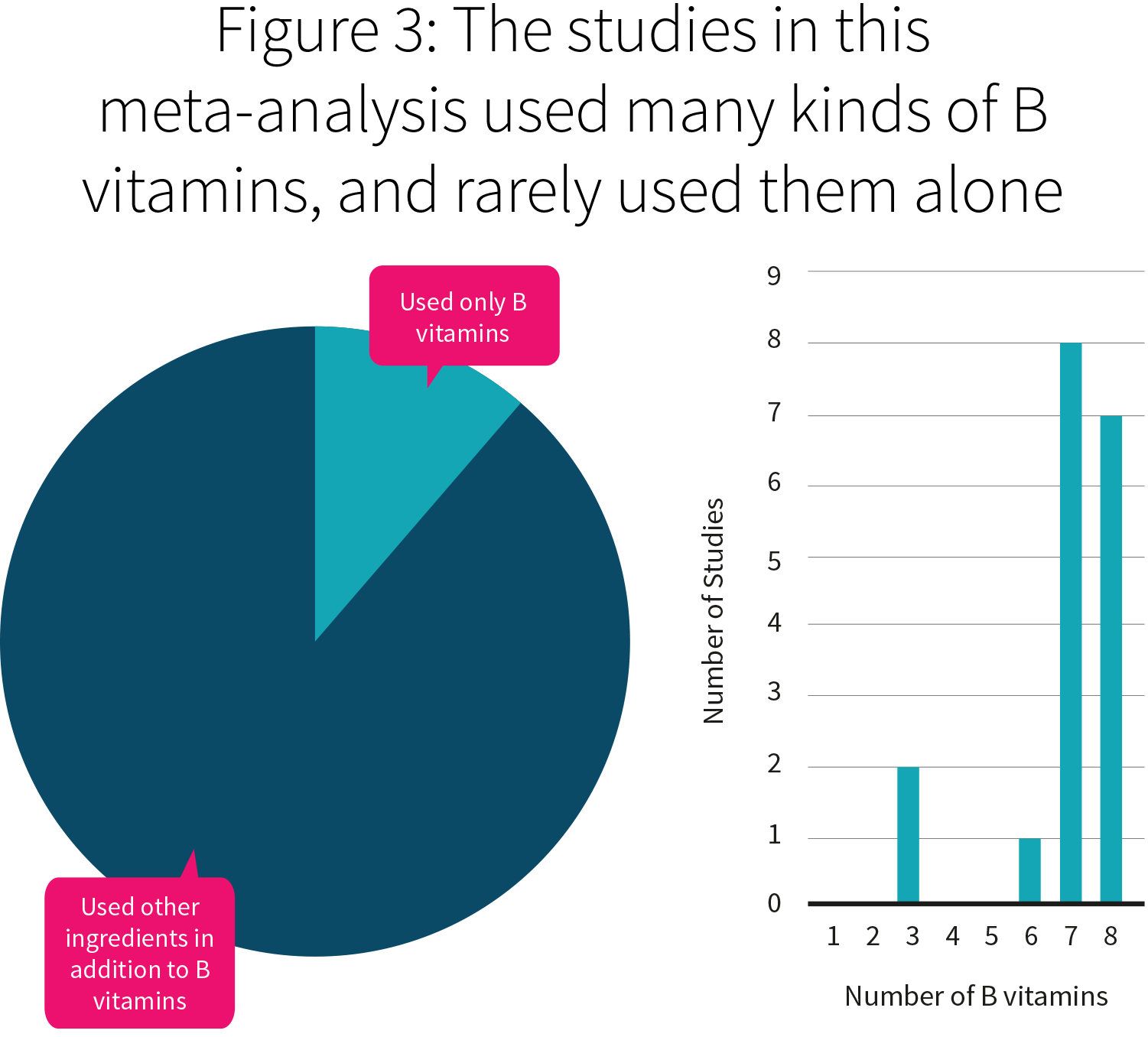 The study also used scales to provide a quantification of mental states. This method has shortcomings and does not provide highly quantifiable or accurate measures of mental states. That said, a true gold standard measure of measuring mood in a healthy population or in people at risk for vitamin deficiency does not exist, and this was reflected in the heterogeneity of measures used in the studies included in this review.

The study under review has several strengths. The study followed PRISMA guidelines and included both healthy and at risk populations. Mood was also measured using three different facets of mood (i.e. depressive symptoms, stress, and anxiety). The study also had some key limitations. First, there was a high level of heterogeneity across studies, which is reflective of the varied dosages and interventions used in the individual studies. Second, B vitamins were not isolated variables and were included as components of a larger list of ingredients/interventions used in each study. Third, there is no gold standard measure for mood measurements, making it difficult to reliably and accurately assess the primary outcome of the study. Finally, the study was not preregistered.

B vitamins play known roles in neurotransmitter metabolism, and there is rationale behind their use for mood disorders. The present study found that supplementation with B vitamins did not substantially alter mood, but may have a small benefit for stress. However, there are substantial limitations to the study that make clean interpretations difficult. As such, the study did not provide robust evidence as to whether B vitamins do, or do not, have an effect in humans on mood disorders.

Q. Is there an upper limit to how high a dose of B vitamins is safe to take?

There are upper limits as to what is considered safe for B vitamin supplementation. Each B vitamin has a different upper limit, with some resulting in more serious adverse events than others. For example, vitamin B6 can cause neuropathy at doses of about one gram per day or more, which is around 800 times the recommended daily intake. You can find a full resource covering the upper daily limit suggestions at the NIH Office of Dietary Supplements for information on each of the B vitamins.

The present study found that supplementation with B vitamins did not substantially alter general measures of mood, nor did it improve depressive symptoms or anxiety. However, there was a small benefit seen for stress. On the other hand, there were substantial limitations involved with the randomized trials that were included in the analysis, such as confounding variables from additional ingredients and highly varied dosages. These limit the ability to draw firm conclusions based on the results. While there may be a benefit from vitamin B supplementation for mood disorders, this study does not provide any conclusive evidence on whether it does or does not have an effect.