Deeper Dive: A spoonful of vinegar might make blood sugar go down

Some studies have shown that acetic acid, the main acid in vinegar, has beneficial effects on glucose and lipid metabolism. For example, in one study, consuming acetic acid prior to a meal increased glucose uptake in skeletal muscle and decreased plasma triglycerides in people with impaired glucose tolerance. In another study,[3] consuming acetic acid prior to a high-carbohydrate meal raised post-meal insulin sensitivity among participants with impaired insulin sensitivity and participants with diagnosed type 2 diabetes. However, the outcomes of the studies have varied, with some studies showing minimal to no effect[4]. To date, there have been numerous randomized trials conducted examining the effect of varying sources and doses of acetic acid on various aspects of metabolism. The present study was a systematic review and meta-analysis that summarized the available evidence from randomized trials and was designed to examine the effect of acetic acid on metabolism, as well as body fat measures in adults with and without chronic metabolic conditions.

Several dietary interventions have been proposed to be included in nutritional interventions in people with metabolic disease. Acetic acid, usually in the form of vinegar, has been shown to improve insulin sensitivity and lipid metabolism in randomized trials. The present study was a systematic review and meta-analysis examining the effect of dietary acetic acid supplementation on metabolic and body fat measures.

The study under review was a systematic review and meta-analysis of randomized controlled trials examining the effect of acetic acid on metabolic and anthropometric outcomes (e.g. body fat) in adults with and without chronic diseases. The study was registered through PROSPERO and was conducted in accordance with PRISMA[5] guidelines.

This study included randomized controlled trials in adults (18 years and older) with or without chronic metabolic diseases. Studies were included if they provided a dietary source of acetic acid, included a placebo or low-dose group, had a duration of at least one week, and included baseline and follow-up measurements for key metabolic parameters and body fat. Studies that provided acetic acid through non-food sources or through intravenous or pill form were excluded from the study. In studies that compared different doses, the group with the highest dose was selected to be included in the analysis.

Subgroup analyses were performed based on the populations included in the studies: 1) healthy, 2) overweight or obese but otherwise healthy, 3) metabolic conditions that included metabolic syndrome, prediabetes, or hypercholesterolemia, and 4) type 2 diabetes. Bias was assessed using the Cochrane Risk of Bias tool[6]. Studies were classified as having “low risk,” “high risk,” or “unclear risk.” Heterogeneity was assessed using the I2 statistic and was deemed significant if the value exceeded 50%. Sensitivity analyses were performed to examine sources of heterogeneity and sources of bias. Publication bias was assessed using Egger’s and Begg’s test as well as by visual inspection of funnel plots.

The study under review was a systematic review and meta-analysis of 16 trials including 910 total participants. The researchers examined the effect of acetic acid on fasting blood glucose, triglyceride, high-density lipoprotein, low-density lipoprotein, glycated hemoglobin (HbA1c), and BMI. Publication and study bias and heterogeneity were also assessed.

Acetic acid supplementation also lowered triglyceride in participants with overweight and obesity by about 21 mg/dL and in participants with type 2 diabetes by about 7.5 mg/dL. Heterogeneity was relatively low in the groups with overweight and obesity (I2 = 4%) and the group with type 2 diabetes (I2 = 0%). There was no significant effect of acetic acid supplementation on either HDL-C or LDL-C, except in one study that examined the effect on people with hypercholesterolemia, which found an increase of approximately 4 mg/dL in HDL-C and a decrease of 45 mg/dL in LDL-C.

Figure 1: Subgroups that may benefit from acetic acid supplementation 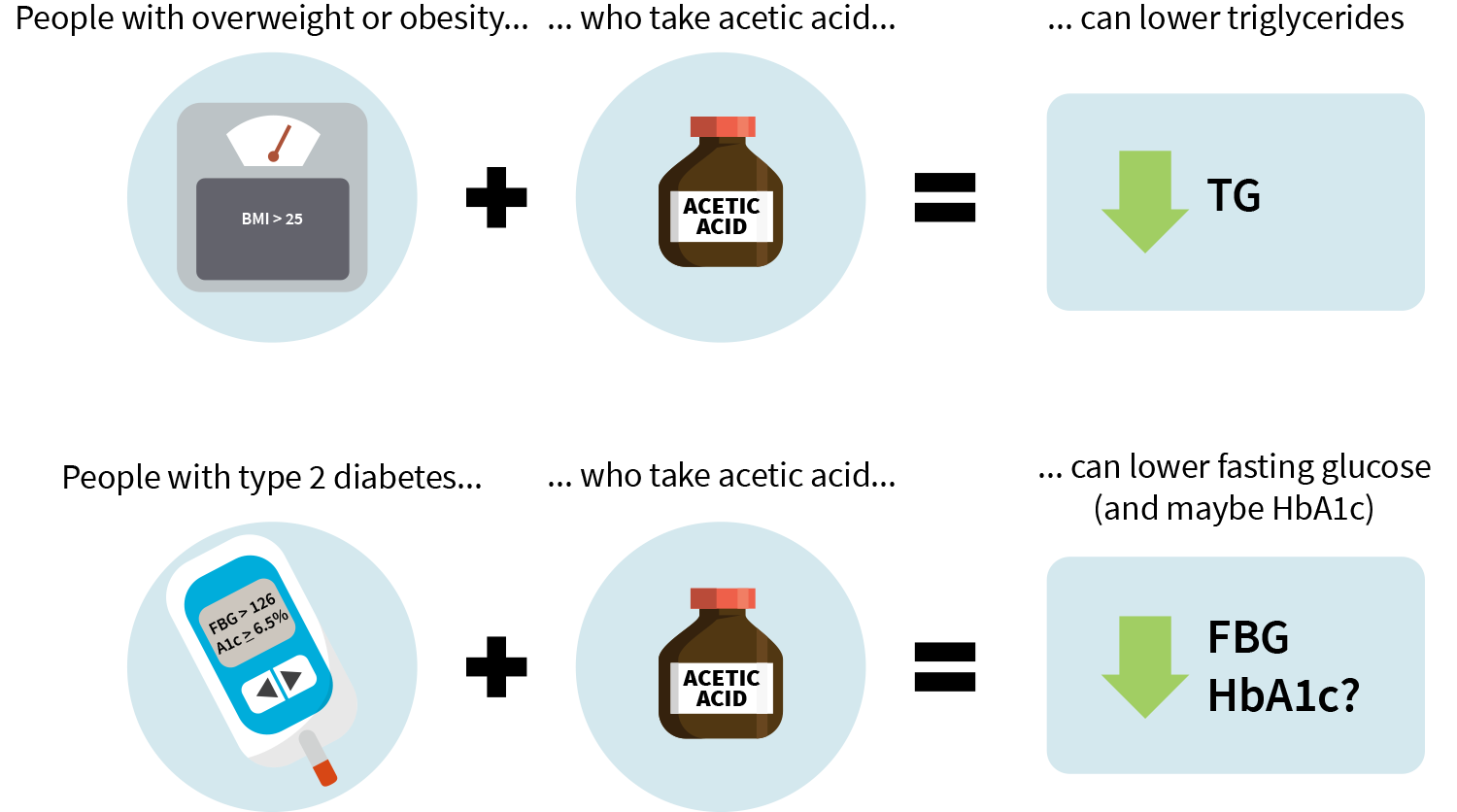 Acetic acid improved fasting blood glucose and triglyceride levels in people with type 2 diabetes and participants with overweight or obesity but who were otherwise metabolically healthy. There were no improvements observed in participants with no disease states, nor were there improvements in HbA1c among any group. There was no effect on BMI or body fat in any group.

The present data suggest that dietary acetic acid may help lower fasting blood glucose in people with diabetes, and lower triglycerides in people with overweight and obesity, as well as with type 2 diabetes. However, in the two studies in healthy, non-overweight or obese participants included in this systematic review, no benefits were detected. The intervention also had no effect on BMI or body fat, regardless of which group it was studied in. Overall, people with type 2 diabetes or with overweight or obesity are the most likely to see benefit on cardiometabolic risk factors from acetic acid supplementation.

These data are supported by previous meta-analyses that examined the effects of acetic acid supplementation on both postprandial glucose levels as well as fasting glucose levels. One of these meta-analyses[7], which focused on the acute effects of vinegar ingestion, found that the consumption of acetic acid in the form of vinegar with a meal lowered both postprandial glucose and insulin levels. Another meta-analysis[8] that focused on trials performed in participants with type 2 diabetes found that consuming acetic acid in the form of vinegar led to lower fasting blood glucose. However, unlike the current study, this study found that acetic acid also lowered HbA1c. Also unlike the meta-analysis at hand, the authors observed reductions in body weight and fat mass. Preclinical studies[9] performed in mice also support these findings, as acetic acid and vinegar improved serum lipids in diet-induced obese mice.

Even if statistically significant benefits are established to exist, the question of clinical relevance regarding the achieved glucose and lipid improvements remains. One way to determine clinical relevance is to compare the effects seen in this study to pharmaceutical effects. The present study found that in people with diabetes, acetic acid supplementation lowered fasting blood glucose by about 35 mg/dL, while metformin lowers blood glucose [10]by about 20 mg/dL at lower doses and about 80 mg/dL at higher doses. Furthermore, the present study did not find any statistically significant reduction in HbA1c, which is a measure of longer-term glycemic control, whereas metformin has shown reductions in HbA1c of about 1–2%[10], depending on the dosage used. While the present study did not find it to be statistically significant, there may indeed be a benefit on HbA1c, given the confidence intervals (CI: -2.95–0.16). Acetic acid lowered fasting triglycerides by about 21 mg/dL, while the fibrate class of drugs used for lowering blood lipids in people with diabetes showed reductions between 50mg/dL and 180 mg/dL[11], with reductions of up to 50%[12] seen in some trials.

Figure 2: How the effects of acetic acid compare to select drugs 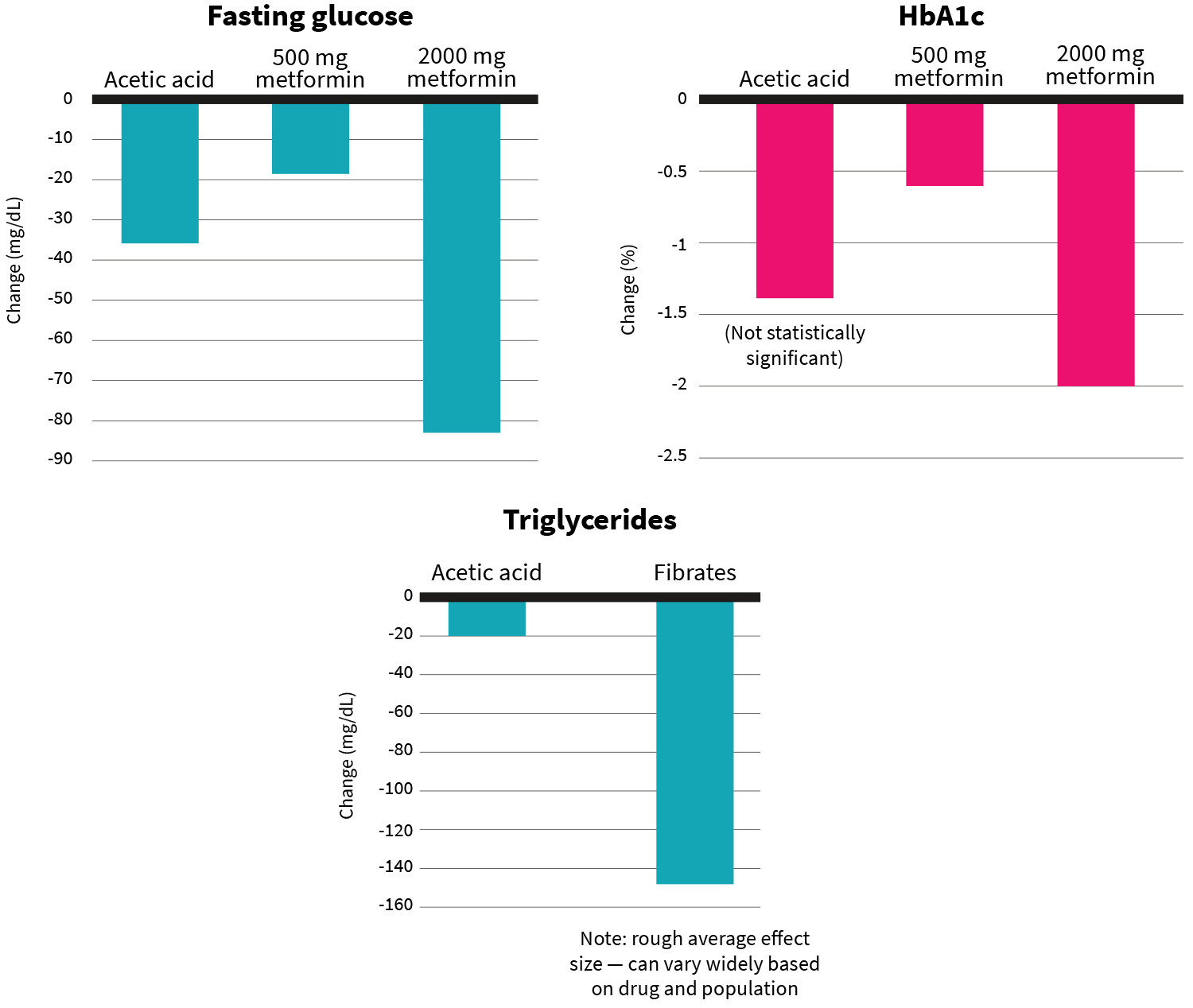 There are several proposed mechanisms by which acetic acid might improve cardiometabolic risk factors in people with diabetes, metabolic syndrome, or obesity. In rodent studies[13] and in vitro studies[14], acetic acid has been shown to activate a protein called AMP-activated protein kinase (AMPK) which stimulates glucose uptake and lipid oxidation (AMPK is one of the targets of the drug metformin). Additionally, studies in diet-induced obese mice[15] found that acetic acid increases the expression of genes regulating fatty acid oxidation in the liver and attenuates body fat accumulation in mice. In a previous study[16] in humans with type 2 diabetes, acute acetic acid consumption improved glucose kinetics without substantially altering lipid metabolism, suggesting an acute increase in insulin sensitivity, possibly through AMPK. There are also some hints[9] from animal research suggesting that the gut microbiome may play a role in vinegar’s mechanism of action.

The study under review has some limitations that should be considered when interpreting the results. First, there was a relatively high risk of bias, with about 63% (10/16) of the studies showing a “high risk” of bias, and only about 13% (2/16) showing a “low risk” of bias. Second, there was no standardization of the form of acetic acid consumed across trials, nor was there any real control for dosing, either experimentally or statistically, which may be important, given the previous dose-response experiments[17]. Third, there were relatively few trials among different populations, which limits the power of the analysis and the ability to draw conclusions. Finally, the present study did not examine the effect of the length of the intervention, as the duration of included studies ranged from 4 to about 13 weeks.

Previous meta-analyses are consistent with the current findings of reduced fasting blood glucose levels as a result of acetic acid supplementation, and previous randomized trials and preclinical data provide evidence to support the reduction in triglycerides seen in people with type 2 diabetes. However, the overall quantity and quality of the evidence is low. In this context, the overall high risk of bias, various potentially outcome-relevant methodological differences between the input studies, and subgroup analyses based on few, or in one case only two, studies, should be kept in mind.

Q. Which foods provide the most acetic acid?

Acetic acid is most commonly found in vinegar[18]. Many of the most commonly consumed forms of vinegar are apple cider vinegar, rice vinegar, balsamic vinegar, and white wine vinegar. This is why many pickled foods, including kimchi, pickled cucumbers, and kombucha are also good dietary sources of acetic acid.

Q. What are the side effects of consuming too much acetic acid?

Generally speaking, in most randomized trials with moderate dosages (up to approximately 4 grams of acetic acid per day), acetic acid has minimal to no documented side effects. However, there are some case reports that suggest practicing some caution when dosing and choosing to consume acetic acid. For example, chronic intake of higher doses of acetic acid (about 12.5 grams per day) can alter electrolyte handling, leading to hypokalemia[19]. There has also been a report of ulcerative esophageal injury[20] and negative effects on liver function[21] due to acetic acid consumption.

This systematic review and meta-analysis indicates that supplementing with acetic acid may provide some benefit for fasting glucose and blood lipids (triglycerides) in people with diabetes, overweight, or obesity, and who are otherwise healthy. However, there were a limited number of studies for each population studied, and the current body of literature has a high risk of bias overall, limiting the confidence in the present findings. Based on the overall findings of this present study, acetic acid supplementation does not appear to provide much benefit, except for potentially improving blood glucose in people with type 2 diabetes. Much more evidence is needed to confirm which populations benefit, what sources are most effective, and what doses and durations are needed to see an effect.